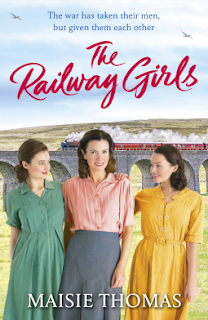 The first novel in the utterly brilliant Railway Girls series. Perfect for fans of Nancy Revell and Ellie Dean.In February, 1922, at the western-most entrance to Victoria Station in Manchester, a massive plaque was unveiled. Beneath a vast tiled map showing the lines of the Lancashire and Yorkshire Railway network, a series of seven bronze panels recorded the names of the men of the Lancashire and Yorkshire Railway who gave their lives for King and Country in the Great War – a total of 1,460 names.In March, 1940, a group of women of varying ages and backgrounds, stand in front of the memorial, ready to do their bit in this new World War..._________________________________________Mabel is determined to make a fresh start as a railway girl where no one will know the terrible thing she did and she can put her guilt behind her... Or is she just running away?Meanwhile Joan will never be as good as her sister, or so her Gran keeps telling her. A new job as a station clerk could be just the thing she needs to forget her troubles at home.And Dot is further into her forties than she cares to admit. Her beloved sons are away fighting and her husband – well, the less said about him the better. Ratty old sod. She is anxious to become a railway girl just like her dear mam – anything to feel she is supporting the sons she prays for every night.The three women start off as strangers, but soon form an unbreakable bond that will get them through the toughest of times...

What a way to start a new series! Maisie Thomas has created an amazing set of characters that get you on side straight away as they start their new lives working on the railways during the war.
And it's definitely a new experience for them, and the men they are working alongside! The attitudes of the time come across in volumes as they are looked down on by some, many thinking that they can't possibly do a job as well as a man - and not only from co-workers, it's from the men in their own families too! A time when women 'knew their place' and men wouldn't even lift a finger around the house. So to get these girls doing a variety of jobs in the railway sector in the North West allows you to see the prejudices they faced both at home and at work.Mabel, Joan and Dot are the main characters but we also get to follow other women they meet along the way, and as they're all at different stages of life we get to see the different aspects they all face with this new way of life. What they all have in common though is their resilience and a desire to stand on their own 2 feet and that's what is brilliant about this book. They face up to their challenges and don't run away from things even if it is tough. The bond between the women is also really strong as they know they are all in the same boat. Dot was one of my favourite as she took no prisoners!! Despite the attitudes she faced from certain male co-workers she was determined to prove them wrong!It was also fascinating to see how the attitude of their families changed over time, as at the beginning they thought they were bringing shame on the family by wanting to work! Even having painted toenails was seen as a disgrace at the time so heaven forbid that a 'woman' was to be seen working on the railway! Nowadays they would have had such pride in these women wanting to work at such a time and do their bit!There was a great mix of drama and humour throughout the book, and it all felt so relatable! These were women you could imagine yourself wanting to hang out with and I'm so excited to see what else this series has in store for us!!