#BookReview THE SIGHT OF YOU by HOLLY MILLER 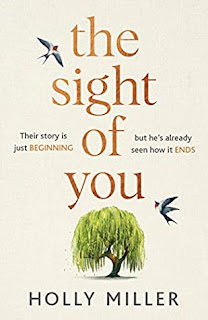 The Light We Lost meets How to Walk Away in this romantic and page-turning American debut that poses a heartbreaking question: Would you choose love, if you knew how it would end?

Joel has sworn off falling in love. But when he meets Callie, he can't help being drawn to her. In Callie, he sees a second chance at life. And in Joel, Callie discovers the kind of love she'd always hoped was real. They challenge one another to take chances, to laugh, and to trust that no matter how hard each falls, the other will be there to catch them.

But Joel has a secret. He dreams about the people he loves, and these dreams always come true. One night, Joel has the dream of Callie he's feared the most, and each must decide: Can Callie stay, knowing her fate? And if her days must be numbered, is there a life she is meant to live?

Told in Joel and Callie's voices, The Sight of You is a sweeping, romantic, and unforgettable American debut, about the bravery it takes to love, especially when we think we know how the story will end.

Just wonderful! It broke my heart and made me ugly cry but I absolutely adored the story of Joel and Callie and how the power of being able to see the future can make such an impact on the decisions you take and the path you follow.They are both very special characters - Joel especially - as he has always had dreams of loved ones where he can see their future, and this has led him to vow never to fall in love as it becomes too much of a burden for him to deal with.That is about to change when he meets Callie. A sweet soul, who lives life sticking to what she knows. She's plagued by self doubt and finds herself living someone else's dream when her friend Grace passes away, so Callie tries to carry out Grace's legacy - whether that makes her happy or not doesn't seem to come into the equation for her.This story is set over 6 years and told from alternating points of view, so we get to share the magic of their friendship and relationship as it evolves. Callie encourages Joel to open up about what is troubling him but when she finally moves in with him, it's not long before she notices a change in him........ does she want to know the details? Would you want to know??This was a truly absorbing and enthralling storyline - the connection you feel towards both characters, the heartbreak, the little moments of utter joy and how their lives map out after decisions are made for what seems the right reasons at the time. This is a book that will live with me for a very long time, so I highly recommend it! I just hope there'll be a film!!

Email ThisBlogThis!Share to TwitterShare to FacebookShare to Pinterest
Labels: Book Blogger, Book Review, books that made me cry, Fiction, Five Star Reads, hodder & stoughton, holly miller, June 2020 release, May 2020, the sight of you