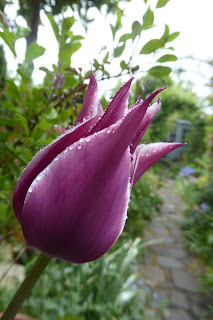 Hello and Happy Saturday!! Hope everyone is staying safe and well! This is all so weird isn't it??!! I've noticed the world around us has started to sound a little noisier this past week so think some people are getting out and about a little more - I don't like it! We're staying safe indoors!

On to books - and it's been a slower reading week for me. Must be because the sun disappeared towards the end of the week haha! BUT it's been a bumper bookhaul week as there was birthday money and vouchers that needed spending straight away!!!  Even had time to stop by Netgalley for one new addition!

So settle down with a cuppa and here's a look back at my week!

We shall start over at Netgalley.

A terrifying and timely new psychological thriller, from the No. 1 Sunday Times bestselling author of The Ice Twins.Newly divorced Jo is delighted to move into her best friend's spare room almost rent-free. The high-tech luxury Camden flat is managed by a meticulous Home Assistant, called Electra, that takes care of the heating, the lights - and sometimes Jo even turns to her for company.Until, late one night, Electra says one sentence that rips Jo's fragile world in two: `I know what you did.' And Jo is horrified. Because in her past she did do something terrible. Something unforgivable.Only two other people in the whole world know Jo's secret. And they would never tell anyone. Would they? As a fierce winter brings London to a standstill, Jo begins to understand that the Assistant on the shelf doesn't just want to control Jo; it wants to destroy her.

AND NOW TO BOOKS I GOT FOR MY BIRTHDAY... 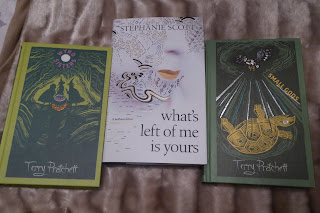 WHAT'S LEFT OF ME IS YOURS by STEPHANIE SCOTT
A gripping debut set in modern-day Tokyo and inspired by a true crime, for readers of Everything I Never Told You and The Perfect Nanny, What's Left of Me Is Yours charts a young woman's search for the truth about her mother's life--and her murder.In Japan, a covert industry has grown up around the "wakaresaseya" (literally "breaker-upper"), a person hired by one spouse to seduce the other in order to gain the advantage in divorce proceedings. When Satō hires Kaitarō, a wakaresaseya agent, to have an affair with his wife, Rina, he assumes it will be an easy case. But Satō has never truly understood Rina or her desires and Kaitarō's job is to do exactly that--until he does it too well. While Rina remains ignorant of the circumstances that brought them together, she and Kaitarō fall in a desperate, singular love, setting in motion a series of violent acts that will forever haunt her daughter's life.Told from alternating points of view and across the breathtaking landscapes of Japan, Stephanie Scott exquisitely renders the affair and its intricate repercussions. As Rina's daughter, Sumiko, fills in the gaps of her mother's story and her own memory, Scott probes the thorny psychological and moral grounds of the actions we take in the name of love, asking where we draw the line between passion and possession.

Written by a hard-working horticulturalist for fellow gardeners, the aim of this diary is to jog people's memories, share plant stories, demystify gardening and most importantly make the reader smile. You'll find a personal year-long diary of gardening along with favourite seasonal plants, timely reminders and entertaining tales of moving sheep, visiting RHS Chelsea Flower Show and speaking at garden clubs. Tamsin's open garden is at the heart of a working farm, so her book reflects the twists and turns of the countryside. For anyone just about to embark on a life in the country, or whose town garden is never tidy and who wonders how the professionals do it, it's a must read. Pick up tips on how to keep warm whilst gardening, get rid of chilblains and grow seasonal food from someone who lives, breathes and eats country gardening.

This book comes at a critical time. Fifty years ago, Africa was home to just over 1.3 million elephants, but by 1990 the number had halved. Meanwhile in the span of a lifetime, the human population has more than doubled.In Levison Wood's The Last Giants, he explores the rapid decline of one of the world's favourite animals. Filled with stories from his own time spent travelling with elephants in Africa, the book is a passionate wake-up call for this endangered species we take for granted. The Last Giants was written to inspire us all to act - to learn more and help save the species from permanent extinction. 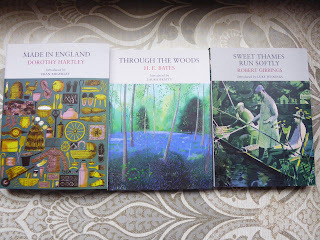 MADE IN ENGLAND by DOROTHY HARTLEY
In the mid 1930s, Dorothy Hartley travelled England by car and bicycle gathering material for the book. Published as a companion volume to Food in England, the book is a portrait not only of the rural industries - whether wood-working or stonework, weaving or pottery, but also of the people engaged in these occupations. Written in direct prose belying her innate curiosity, each chapter covers a specific skill, and is illustrated with Hartley's own photographs and charming, accurate pen-andink drawings. As these traditional skills become practised less widely, our connection to ancient knowledge, and the land, is threatened. The republication of this book, together with an introduction from the Turner Prize winning architect and artist, Fran Edgely (from Assemble), is aimed at restoring some of those lost links and reviving interest in craft and making by hand.

THROUGH THE WOODS by H.E.BATES
H.E. Bates carried a woodland in his imagination. He fell under its spell as a boy growing up in the Midlands, becoming increasingly enchanted each time he stepped below the wooded canopy. Memory magnified its mystery over the years, enriching his stories as he grew successful as a writer. But why did this place become a part of him? What are the qualities of all woodlands that make them so special? Set in Kent, Bates returns to those trees of his youth to breathe life into the changing character of a single woodland year, revealing how precious they are to the English countryside. Our new edition is illustrated throughout with Agnes Miller Parker's wonderful engravings. "Bates's 1936 volume is aptly named as it unfurls the life cycle of a British forest over a 12-month period, covering its flora, fauna, and human interactions. The text is illustrated with 73 absolutely gorgeous woodcuts by Agnes Miller Parker, making this a nearly irresistible package."-Library Journal First published 1936 by Victor Gollancz.

SWEET THAMES RUN SOFTLY by ROBERT GIBBINGS
In 1939, on the eve of the Second World War, Robert Gibbings launched his home-made punt on the River Thames and began a slow journey downstream, armed with a sketchpad and a microscope. From the river's source at the edge of the Cotswold Hills to the bustle of London's docks, Sweet Thames Run Softly is a charming, often eccentric account.

In Poland, as World War II rages, a mother hides with her young daughter, a musical prodigy whose slightest sound may cost them their lives.

As Nazi soldiers round up the Jews in their town, Róża and her 5-year-old daughter, Shira, flee, seeking shelter in a neighbor’s barn. Hidden in the hayloft day and night, Shira struggles to stay still and quiet, as music pulses through her and the farmyard outside beckons. To soothe her daughter and pass the time, Róża tells her a story about a girl in an enchanted garden:

The girl is forbidden from making a sound, so the yellow bird sings. He sings whatever the girl composes in her head: high-pitched trills of piccolo; low-throated growls of contrabassoon. Music helps the flowers bloom.

In this make-believe world, Róża can shield Shira from the horrors that surround them. But the day comes when their haven is no longer safe, and Róża must make an impossible choice: whether to keep Shira by her side or give her the chance to survive apart.

Inspired by the true stories of Jewish children hidden during World War II, Jennifer Rosner’s debut is a breathtaking novel about the unbreakable bond between a mother and a daughter. Beautiful and riveting, The Yellow Bird Sings is a testament to the triumph of hope—a whispered story, a bird’s song—in even the darkest of times.

WE BEGIN AT THE END by CHRIS WHITAKER

With the staggering intensity of James Lee Burke and the absorbing narrative of Jane Harper's The Dry, We Begin at the End is a powerful novel about absolute love and the lengths we will go to keep our family safe. This is a story about good and evil and how life is lived somewhere in between.'YOU CAN'T SAVE SOMEONE THAT DOESN'T WANT TO BE SAVED . . .'Thirty years ago, Vincent King became a killer.Now, he's been released from prison and is back in his hometown of Cape Haven, California. Not everyone is pleased to see him. Like Star Radley, his ex-girlfriend, and sister of the girl he killed.Duchess Radley, Star's thirteen-year-old daughter, is part-carer, part-protector to her younger brother, Robin - and to her deeply troubled mother. But in trying to protect Star, Duchess inadvertently sets off a chain of events that will have tragic consequences not only for her family, but also the whole town.Murder, revenge, retribution.How far can we run from the past when the past seems doomed to repeat itself?

I AM DUST by LOUISE BEECH - 99p on Kindle currently! for a short time only!

The Dean Wilson Theatre is believed to be haunted by a long-dead actress, singing her last song, waiting for her final cue, looking for her killer…

Now Dust, the iconic musical, is returning after twenty years. But who will be brave enough to take on the role of ghostly goddess Esme Black, last played by Morgan Miller, who was murdered in her dressing room?

Theatre usher Chloe Dee is caught up in the spectacle. As the new actors arrive, including an unexpected face from her past, everything changes. Are the eerie sounds and sightings backstage real or just her imagination? Is someone playing games?

Is the role of Esme Black cursed? Could witchcraft be at the heart of the tragedy? And are dark deeds from Chloe’s past about to catch up with her?

Not all the drama takes place onstage. Sometimes murder, magic, obsession and the biggest of betrayals are real life. When you’re in the theatre shadows, you see everything.

And Chloe has been watching…

SUNSET OVER THE CHERRY ORCHARD by JO THOMAS

THE MATING HABITS OF STAGS by RAY ROBINSON