Delighted to be here today as part of the Blog Tour for the wonderful COMING HOME TO HERITAGE COVE by HELEN J ROLFE. My thanks to the author, publisher and Rachel of Rachel's Random Resources for letting me be part of the tour and sharing my review! 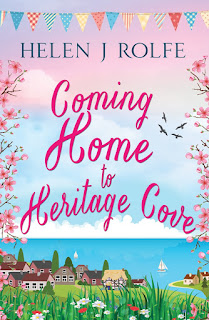 Welcome to Heritage Cove, the little village by the sea brimming with character, community and friendship, and the perfect place to fall in love this summer…

Melissa rushes back to Heritage Cove when Barney, the man who’s been like a father figure to her since she was a little girl, ends up in hospital. After an absence of five years, her return isn’t going to be easy, especially when she bumps into Harvey, the love of her life and the man she’s never been able to forget.

For reasons he couldn't explain at the time, Harvey changed his mind about going with Melissa to start afresh as they'd planned, and life moved on for the both of them. But with Melissa back in the village and determined to stick around to help Barney, they can't avoid each other forever. Melissa knows she let so many people down by staying away for so long, but she and Harvey blame each other for what happened and neither of them is willing to admit to being in the wrong.

When Barney insists on cancelling the Wedding Dress Ball, the charity fundraiser he holds every year in the stunning barn on his property, Melissa and Harvey realise they’re going to have to pull together. Otherwise the man they once knew might be gone forever. And when they unearth a secret Barney has never shared with anyone, they go in search of answers to not only ensure the ball runs this summer, but to bring back the Barney they know and love.

Back in the cove after all this time, Melissa gets to see the life she left behind and it’s time to deal with what it was that drove her away in the first place.

Beneath the summer sunshine in Heritage Cove, the sea sparkles, the heat rises and new love, reconciliations and the answers to an old love story could bring changes for everyone. 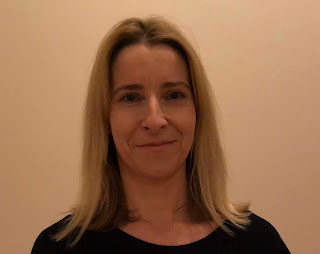 Location is a big part of the adventure in Helen's books and she enjoys setting stories in different cities and countries where she thinks her readers might like to escape to.

Born and raised in the UK, Helen graduated from University with a business degree and began working in I.T. This job took her over to Australia and it was there that she finally turned to what she loved and studied writing and journalism. She spent a while freelancing for women's health and fitness magazines, volunteered with the PR department of a children's hospital where she wrote articles and media releases, and eventually began writing fiction in 2011. And now, she thinks she may just have found her dream job.

Helen currently lives in Hertfordshire, UK, with her husband and their children.

Social Media Links –
Helen loves to hear from readers so please don't hesitate to get in touch. She can be found at:

I found this to be a perfect feelgood, escapism read and have taken Heritage Cove and its' inhabitants to my heart!

Melissa has to return to Heritage Cove after Barney, who is a real father figure to her, is taken ill. That means confronting the past she ran away from 5 years ago! And that past is Harvey, the love of her life who still lives there.  Their relationship had a sour end, mainly due to their stubbornness, so it's going to be tough for her to face things again - all the good and bad memories come rushing back and it's how she deals with them that shows if the time away has helped her.

Barney normally hosts a Wedding Dress Ball but he is adamant it won't be going ahead this year, and gets very prickly when  pushed further on it so you are left wondering what he's hiding.  He's never been good at accepting help, but good at giving help to others, so Melissa and Harvey have a tough job on their hands trying to make him see sense.

I loved the story about reconnecting and seeing how time changes things, but I also really enjoyed the mystery side of the story as they look into the past when they make a discovery and start to delve into the past of Barney and why things have meant so much to him over the years.

The relationship between Harvey and Melissa is a complex one because of their pasts and I found them to be such endearing characters due to their life experiences and I think that's why I felt so warmly towards them as they tried to forgive one another, and themselves, for what happened to their relationship all those years ago.  I am just hoping there'll be a return to Heritage Cove very soon as I want more!!