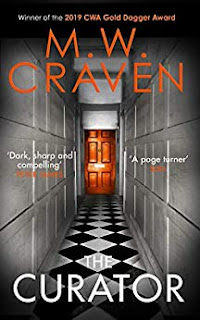 Delighted to be the latest stop on the blog tour for the fabulous THE CURATOR by M.W.CRAVEN. My  thanks to the author, publisher and Beth Wright at Little Brown for putting the tour together and letting me be part of it all!

It's Christmas and a serial killer is leaving displayed body parts all over Cumbria. A strange message is left at each scene: #BSC6. Called in to investigate, the National Crime Agency's Washington Poe and Tilly Bradshaw are faced with a case that makes no sense. Why were some victims anaesthetized, while others died in appalling agony? Why is their only suspect denying what they can irrefutably prove but admitting to things they weren't even aware of? And why did the victims all take the same two weeks off work three years earlier?And when a disgraced FBI agent gets in touch things take an even darker turn. Because she doesn't think Poe is dealing with a serial killer at all; she thinks he's dealing with someone far, far worse - a man who calls himself the Curator.And nothing will ever be the same again...

They are back! And solving crimes better than ever!!! My favourite investigating team return with another grizzly case and an ending that left me truly shocked!! You know when you have to read the last few pages over and over a few times to let it all sink in... yeah that kind of ending!!

The combination of Washington Poe and Tilly Bradshaw works wonders again in this novel - their dynamics are more settled and understanding, but there is still that edge and unpredictability that I love about them.  So when body parts are discovered at certain locations with a single chilling message #BCS6 left with them, it is up to Poe and Bradshaw to put the pieces together and find out the victims and the perpitrator. And it's not an easy hunt for them - why are these victims targeted? Is there a link between them? What is the significance of the message?  The tiniest little piece of information is often key to each investigation even more so when there is so very little evidence left behind by the serial killer in these instances.

When an FBI agent gets involved in the case and points out the similarities in a case involving The Curator the action really picks up, and the investigation gets more complex and more intriguing to follow.

It is a gruesome and shocking case that unfolds, but there are still moments of humour that lighten the darkness.  It's another corker of a story from M.W.Craven and I'm already eagerly awaiting the next case that Washington and Tilly have to solve!!