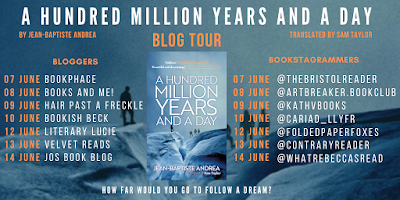 Extremely delighted to be the latest stop on the Blog Tour for A HUNDRED MILLION YEARS AND A DAY by JEAN-BAPTISTE ANDREA. My thanks to Isabelle at Gallic Books for putting the tour together and letting me be part of it all! 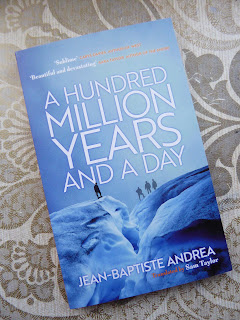 ‘On the mountain, the only monsters are the ones you take with you.’

Summer 1954. Stan has been hunting for fossils since the age of six. Now, having made a career out of studying the remains of tiny lifeforms, he hears a story he cannot forget: the skeleton of a huge creature, a veritable dragon, lies deep in an Alpine glacier. And he is determined to find it.


Leaving his life in Paris behind, Stan sets out in pursuit of a legend. But he is no mountaineer, and to attempt his dangerous expedition he must call on loyal friend and colleague Umberto, who arrives with an eccentric young assistant, and expert guide Gio. Time is short: the four men must descend before the weather turns. Bonds are forged and tested as the hazardous quest for the earth’s lost creatures becomes a journey into Stan’s own past.

This was a fascinating novel about the lengths some will go to in the pursuit of a dream - the obsession, the insanity, the sacrifices and the seeds sown from a young age that will shape a person in their future endeavours.

Stan has been hunting fossils since he was 6 years old - he was much happier on his own hunting fossils but that marked him out as being different so he was bullied. Not only by other children, but by his own father which was the heartbreaking aspect of the story.  He never had that support from his dad and as he has flashbacks while climbing the mountain, we get an extraordinary glimpse into the childhood traumas the poor little Stan suffered.

And those traumas set him on the path to want to prove people wrong, which is why he doesn't want to seem to acknowledge the danger he is putting himself and his team in on the quest to find the skeleton of a dragon in an alpine glacier.

His backstory is heartbreaking and has totally shaped his outlook on life right now and it was often emotional to witness the physical and mental battle he faces on every step of his journey. But with the darkside, he manages to find little moments of happy that keep him pushing on and that's what I'll take away from this book the most.  He never let the darker images dampen his determination to achieve the seemingly impossible.  Being told 'no' all his life, being bullied, laughed at, meant that he only wanted to prove things to himself that he was good enough - no matter what the cost.