#BookReview KING OF THE CROWS by RUSSELL DAY 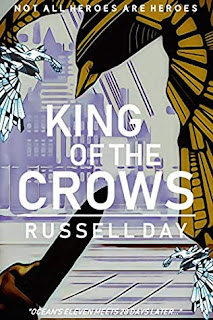 2028, eight years after a pandemic swept across Europe, the virus has been defeated and normal life has resumed. Memories of The Lockdown have already become clouded by myth, rumour and conspiracy. Books have been written, movies have been released and the names Robertson, Miller & Maccallan have slipped into legend. Together they hauled The Crows, a ragged group of survivors, across the ruins of London. Kept them alive, kept them safe, kept them moving.But not all myths are true and not all heroes are heroes.Questions are starting to be asked about what really happened during those days when society crumbled and the capital city became a killing ground.Finally the truth will be revealed.


Praise for King Of The Crows“Staggeringly prescient – an absolute triumph…”“The most inventive heist novel you’ll ever read.”“In terms of plot, structure and ambition, this is the most imaginative novel I’ve read in years…”

Praise for Russell Day – winner of the CWA Margaret Allingham Prize"Russell Day is an artist - one who paints pictures with his words...""A brilliant book, one that has cemented Russell Day straight into my must read authors list.""Russell Day has established himself as one of the best new crime writers of recent years. I cannot wait for his next novel."

Reading a book about a pandemic during an actual real life pandemic could be seen by some as a stupid thing to do!! BUT for me I found it the perfect time to read this book!! The parallels between fiction - this book was written a couple of years ago, which makes it even more staggering to me on how events are panning out... - and the reality are mindblowing and it's a difficult book to put down once I started reading it!Set in 2028, 8 years after the virus that ravaged Europe has moved on, this book is a story that looks back over those years when the virus was rife, how people lived through it and how people are looking back on it and questioning what they were told and how it has been portrayed by the media as films and books have been released chronicling the events, creating legends of those involved in particular events.It's told through snippets of the screenplays, the internet chatter, police interviews, graffiti seen, emails sent and the experiences of people moving around on the ground at that time and this really does help give it a more realistic feel. What struck me as the most pertinent and telling was the relevance of hearsay becoming belief! The internet rumour sites were readily spreading untruths quicker than the virus itself, and all it needed was one person to read this and a new truth is born. Oh and cats.... never trusted them before, even more so now!!!As we follow the real story of the time during the pandemic, alongside the way the films portrayed the main characters of The Crows, it was fascinating to see how the hatred was whipped up amongst different factions - the anti government groups, anti police, anti media..... a little too realistic for my liking!! The virus itself mutates, there are zombies/undead but there is more insanity leading to extremes in behaviour and we're witness to that with the actions of many, fighting for their lives after being hung out to dry by those in charge, while others see this as a perfect opportunity for a raid on the financial capital.The before, the during, the after is all brilliantly captured in all its grim glory - the fear, the panic, the unknown, the theories! One phrase really struck a chord for me 'Stay calm, Stay at home, do what we say'!! Sounds a little familiar!!It was exhilarating, exhausting, extraordinary - an experience I am very grateful to have had the pleasure of reading - and living through! - and I cannot recommend this highly enough! One of my books of 2020!!