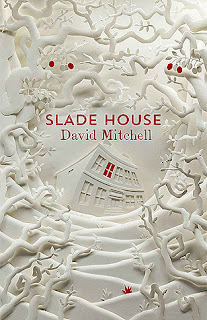 Keep your eyes peeled for a small black iron door.

Down the road from a working-class British pub, along the brick wall of a narrow alley, if the conditions are exactly right, you’ll find the entrance to Slade House. A stranger will greet you by name and invite you inside. At first, you won’t want to leave. Later, you’ll find that you can’t. Every nine years, the house’s residents — an odd brother and sister — extend a unique invitation to someone who’s different or lonely: a precocious teenager, a recently divorced policeman, a shy college student. But what really goes on inside Slade House? For those who find out, it’s already too late...

Spanning five decades, from the last days of the 1970s to the present, leaping genres, and barreling toward an astonishing conclusion, this intricately woven novel will pull you into a reality-warping new vision of the haunted house story—as only David Mitchell could imagine it.

Book 3 of my 20 Books of Summer 2020.This was more miss than hit for me, unfortunately. I don't know if I wanted it to be more weird, more scary, more humourous! But it just fell short on all counts for me as you didn't get to spend enough time in the company of various characters to care enough what fate befell them! Maybe if I had read Bone Clocks before it would have all made a little more sense....The house itself was a fascinating prospect with all its' odd goings on, as well as the twins Jonah and Norah as their story was intriguing to say the least - I would have loved to have just read all about them and their abilities