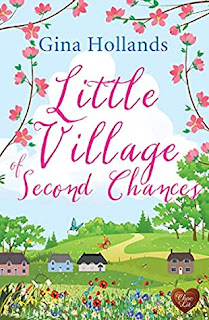 A huge delight today to be hosting the wonderful Gina Hollands for a guest post on publication day for the fabulous LITTLE VILLAGE OF SECOND CHANCES!

So without further ado, I'm handing the reigns over to Gina so she can share her thoughts on what inspired her to write this book! 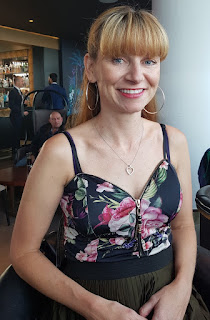 Little Village of Second Chances is my first book with Choc Lit and it's wonderful to see it come to life. It's set in the picturesque fictional village of Wetherstone-on-Ouse, which lies just outside of York. The story starts when city-girl Sarah Pickering arrives in the village with the aim of persuading the locals to sell up so that the company she works for can build a new road. Her neighbour, the surly yet ruggedly attractive Shay McGillen, whose property is number one on Sarah's target list, has no intentions of moving from the place that's given him a much-needed new start after a tumultuous few years. The pair has every reason to despise one another, but a dramatic event forces them together, making them face their fears and futures, and the possibility that the road to happiness may actually involve each other.

I was inspired to write a village-based romance as I live in a village myself and love the community spirit, the cosiness of the local pub, the friendliness of the village shop and the eccentric and colourful nature of some of the characters who make it the place it is. I brought all these elements into Little Village of Second Chances. Although Shay and Sarah are the main characters, I really enjoyed writing the scenes where they interacted with some of the sub-characters, as it was fun bringing these comedic aspects into the story and bringing in some local dialect.

I chose a Yorkshire setting as, although I now live in Sussex, I am originally from a small town near York. My previous books have all been set in locations which might be considered traditionally more glamorous, including Tuscany, Iceland, London and Montenegro, but a country setting in the middle of a harsh winter can be just as romantic, albeit with wellies and mittens!

In Little Village of Second Chances, both Sarah and Shay have turbulent pasts they're escaping from and while it was important for me to show that they'd never forget certain things that happened to them, that didn't mean they wouldn't get another shot at love - quite the opposite! I hope it gives readers hope that whatever has happened to them in the past, and however despondent they may feel as a result - there's always a second chance at happiness.

Like most writers, I'm an avid reader, and gobble up books of all genres from thriller to fantasy, romance to cosy mystery, but there's one reason alone that I read and that's for pure escapism and to feel good. I hope that readers will experience the whole spectrum of emotions when they read Little Village of Second Chances but ultimately that it will leave them with an overriding sense of wellbeing. I love finishing a book that makes me feel warm and fuzzy (okay, maybe not so much with a thriller - that's where the romance comes in) and my intention with Little Village of Second Chances is to do just that. And I don't think it's a spoiler to say it has a happy end!

Surely everyone deserves a second chance?

Ex-fireman and edible flower farmer Shay McGillen has plenty of reasons not to give Sarah Pickering even one chance when she turns up in his small Yorkshire village. After all, she is only there to try and convince him and his fellow villagers to sell up so her company can build a bypass. If Sarah thinks she can make Shay give up his farmhouse and his business, she has another thing coming!

But when an unexpected blizzard leaves Sarah stranded in Shay’s home, he soon realises that they are far more alike than he could have ever imagined – and perhaps both of them deserve a second chance ...

Gina Hollands was born and bred in Yorkshire, England. She has worked in public relations for 15 years, since graduating from Oxford University with a degree in modern languages. Gina now lives on the West Sussex coast with her husband and young son. When she's not writing Gina is likely to be participating in her other hobby - dancing, be it salsa, jive or lindy hop.