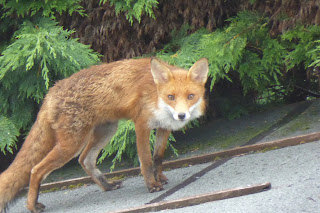 Hello and Happy Saturday! Had a fox watching me today which sums up a pretty weird week! Still haven't made it to an actual bookshop now that some are opening up and think I'll be sticking to online bookshopping for a while yet - but it will feel good to be back surrounded by books sometime soon!

On the bookish front for me this week it's been a good one! 4 books finished, a couple of book purchases, and 2 newbies from Netgalley!

The Secret Life of Books by Tom Mole - 5 stars

The Little Teashop in Tokyo by Julie Caplin - 4 stars

Lesson One of the ScholomanceLearning has never been this deadlyA Deadly Education is set at Scholomance, a school for the magically gifted where failure means certain death (for real) — until one girl, El, begins to unlock its many secrets. There are no teachers, no holidays, and no friendships, save strategic ones. Survival is more important than any letter grade, for the school won’t allow its students to leave until they graduate… or die! The rules are deceptively simple: Don’t walk the halls alone. And beware of the monsters who lurk everywhere. El is uniquely prepared for the school’s dangers. She may be without allies, but she possesses a dark power strong enough to level mountains and wipe out millions. It would be easy enough for El to defeat the monsters that prowl the school. The problem? Her powerful dark magic might also kill all the other students.

When war imprisons them, only kindness will free them…
China, 1941. Elspeth Kent has fled an unhappy life in England for a teaching post at a missionary school in northern China. But when Japan declares war on the Allies and occupies the school, security and home comforts are replaced by privation, uncertainty and fear.
For ten-year-old Nancy Plummer and her school friends, now separated from their parents indefinitely, Miss Kent’s new Girl Guide patrol provides a precious reminder of home in a land where they are now the enemy.
Elspeth and her fellow teachers, and Nancy and her friends, need courage, friendship and fortitude as they pray for liberation. But worse is to come. Removed from the school, they face even greater uncertainty and danger at a Japanese internment camp, where cruelty and punishment reign.
Inspired by true events, this is an unforgettable read about a remarkable community faced with unimaginable hardship, and the life-changing bonds formed in a distant corner of a terrible war.

And I've treated myself online to these......from the publisher EYE/LIGHTNING BOOKS 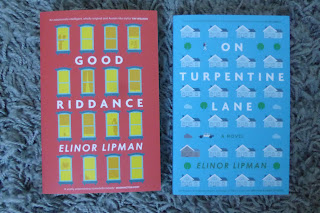 ON TURPENTINE LANE  by Elinor Lipman
At thirty-two, Faith Frankel has returned to her suburban hometown where she works in the fundraising department of her old school, writing thank-you notes to benefactors. Keen to get her life back on track she buys a sweet but dilapidated bungalow on Turpentine Lane.
Never mind that her fiancé is currently 'finding himself' while walking across America and too busy to return her texts, that her witless boss has accused her of fraud, or that her father is going through a mid-life crisis that involves painting fake old masters and hooking up with a much younger woman — Faith is looking forward to a peaceful life in her new home.
But when a policeman knocks on her door asking to look in the basement she discovers that the history of 10 Turpentine Lane is anything but peaceful.
On Turpentine Lane is a madcap comedy from one of America's most acclaimed novelists..
GOOD RIDDANCE by ELINOR LIPMAN
Daphne Maritch doesn't quite know what to make of the heavily annotated high school yearbook she inherits from her mother, who held this relic dear. Too dear. The late June Winter Maritch was the teacher to whom the class of '68 had dedicated its yearbook, and in turn she went on to attend every reunion, scribbling notes and observations after each one—not always charitably—and noting who overstepped boundaries of many kinds.

In a fit of decluttering (the yearbook did not, Daphne concluded, "spark joy"), she discards it when she moves to a small New York City apartment. But when it's found in the recycling bin by a busybody neighbor/documentary filmmaker, the yearbook's mysteries—not to mention her own family's—take on a whole new urgency, and Daphne finds herself entangled in a series of events both poignant and absurd.
And I've also received some lovely book post from Behind The Hat Press - with a G&T too!!
OLD & UGLY by C L MOIR 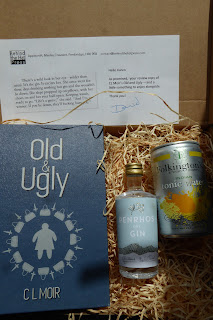 Old and Ugly is the story of that re-union - and the story of Ange’s life.
​
Hilarious and laughable, conceited and fearful,  feisty  and (some might say) a fool for the admiration of men, Ange must finally confront the truth about her fantastical life of glamour and good fortune to be freed from its secrets – and freed from the man who made her, then broke her.

A Summer of Drowning by John Burnside