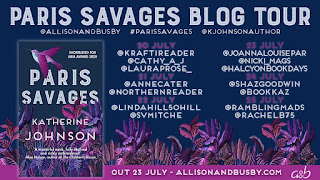 A huge delight to be the latest stop on the Blog Tour for PARIS SAVAGES by KATHERINE JOHNSON. My thanks to Lesley Crooks at Allison & Busby for putting the tour together and letting me be part of it all! 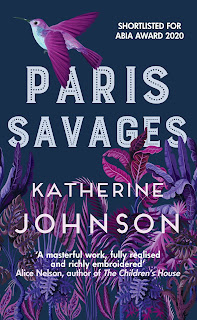 Fraser Island, 1882. The population of the Badtjala people is in sharp decline following a run of brutal massacres. When German scientist Louis Muller offers to sail three Badtjala people - Bonny, Jurano and Dorondera - to Europe to perform to huge crowds, the proud and headstrong Bonny agrees, hoping to bring his people's plight to the Queen of England. Accompanied by Muller's bright, grieving daughter, Hilda, the group begins their journey to belle-epoque Europe to perform in Hamburg, Berlin, Paris and eventually London. While crowds in Europe are enthusiastic to see the unique dances, singing, fights and pole climbing from the oldest culture in the world, the attention is relentless, and the fascination of scientists intrusive. When disaster strikes, Bonny must find a way to return home. 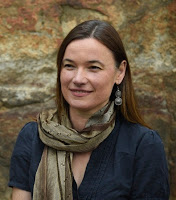 KATHERINE JOHNSON lives in Tasmania with her husband and two children. She is the author of three previous novels and her manuscripts have won Varuna Awards and the Tasmanian Premier’s Literary Prizes.

I found this to be a book with a big impact on me as a reader.  I knew very little of the 'human zoo's' that were all the rage in the late 1800's, and to witness the impact on those signed up to take part was often very unsettling and uncomfortable - the cruelty of humans towards other humans in the pursuit of money seems not to have changed much over the years. Although this is fiction it is based on real historical events which makes it even more hard hitting.

Told from the viewpoint  of Hilda through her diary, we get to see the story of how she sees the world.  Her father is a scientist and is involved with travelling around the world a lot and it's his work that brings the Badjtala people to his attention and to the attention of the world.  Those in Europe are desperate to see these different people so 3 of them travel with the scientist and his daughter to be 'shown off' and studied.

And that's where it gets very uncomfortable as you read of their experiences.  From travelling by boat and their treatment by the crew on board, to their experiences in Europe and at the hands of the scientists they encounter - they become commodities and freaks to be prodded and poked.  The 3 who travel - Bonny, Jurano & Dorondera -  are such great characters who face appalling treatment.  And I loved Hilda too who was very wise beyond her years. You could see her battling with herself in wanting to be loyal to her father, but also seeing things from the other side of the coin and how her father changes when he's in the company of others.  She deeply cares for her new 'friends' and for her to see how others treat them wherever they go is tough for her.  It really is shocking to witness for her.

This was a truly fascinating and enthralling book that really opened my eyes to a period of history I knew very little about.  Highly recommended!! 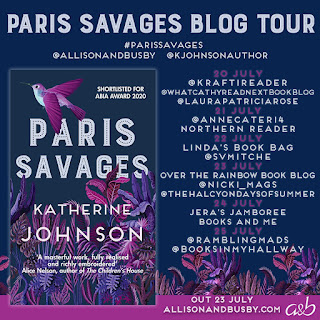