#BookReview HAPPY DAYS OF THE GRUMP by TUOMAS KYRO #20BooksOfSummer20 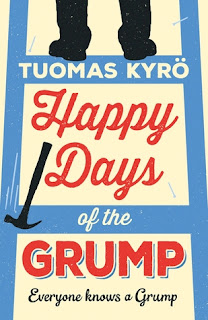 Everybody recognises the Grump, everybody knows a grump. And maybe there's a little grump in every one of us . . .

The Grump, at eighty years old, is more focused on death than life; building his own coffin and keen to write his will in ink - who can trust technology, after all? - he knows that everything was much better in the old days.

But when the Grump finds himself in hospital in a semi-conscious state after falling down his basement steps, his life passes before his eyes. Thinking of the people closest to him and reflecting on the changes society has brought about, he realises he must come to terms with the cards life has dealt him.

With wry humour and sharp observations on family and relationships, The Happy Days of the Grump is a black comedy, sure to bring a smile to the face of even the grumpiest among us.

This was a little more serious than I was expecting, and I found myself feeling quite sorry for the Grump as he faced his demise! His mind is sharp as a tack, but his body is failing him and to be stuck in that quandry of wanting to carry on as normal, but unable too makes him question the world around him. I also found myself feeling a little sad for him that his family seemingly couldn't wait to get him into a care home instead of talking through other options with him. He seemed to be the one coming up with the workable options on that front!

The Grump is very set in his ways, so when life starts to change for him he isn't sure how to accept it other than to find fault with all that the modern world has to offer - hard to disagree with him about some of his well made points!!

It made for an engaging read, even if it didn't really go anywhere and felt a bit flat at times. It was fascinating to see the world through his eyes and I admired his spirit of never wanting to give up, even if those around him seemed to be giving up on him living a somewhat independant life.