#BookReview THE WAY OF THE HARE by MARIANNE TAYLOR #20BooksOfSummer20 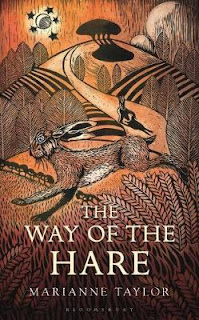 The Brown Hare is an animal we all know but rather rarely see, even though it is quite common, active by day and lives in the wide open spaces of classic lowland countryside. It can make itself almost invisible, lying still in its form until it takes off suddenly, fleeing at astounding, breakneck pace. Those lucky enough to see a hare in a moment of stillness, may see in its staring golden eyes a strangeness and mystery that hints at its legendary status. It is a favourite subject of wildlife artists and sculptors in love with depicting its lithe and leggy form in full flight, and its March mating madness. A nationwide treasure-hunt for a golden hare, sparked by Kit Williams' famous 1979 book Masquerade ended with more mystery than it began. It's smaller cousin, the Mountain Hare, is an even greater mystery, living on bleak uplands where snowfall shuts down access in winter. It changes colour with the seasons and is hunted by the great Golden Eagle, but most of us hardly know it exists. The book explores the lives of both of these hares, in life and in story, and attempts to unravel the real animal from its image in our collective imagination, and examine just why it holds such fascination for us. The book includes accounts of first-hand encounters with wild hares, and research evidence from those who have worked with them and studied them. It is illustrated with line drawings and a section of colour photographs taken by the author.

I love all things 'bunny' so was genuinely fascinated and entertained by this book which is full of everything you ever needed to know, and more!, about the wonderful creature that is the hare!It is packed full of info so sometimes does feel a little too wordy, but there is so much to be shared about hares that I think it needs to be this way! As well as the ways of the hare, the biology, the habitats and biology, it also features the role that hares play in literature and folklore and it really makes you think of just how relevant they are in the world around us.There's also some lovely colour photographs - I'd have been happier with more but then that's just me! - and they really added to the whole hare experience of this book. It's very immersive and a comprehensive study of a truly fascinating creature.