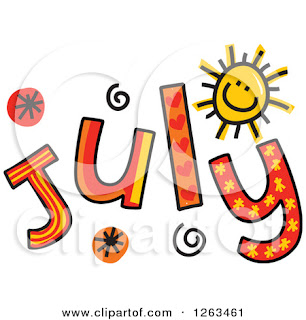 Christmas gets ever nearer!!!!! 🤣  Let's hope the world is a happier, freer place by then anyway!!

But it's July, so that means another set of books need to be sorted out for my reading pleasure!  And the month ahead for me brings a few more Blog Tours, yet more Netgalley releases and a couple of new releases I'm eager to get to!! Let's hope I can squeeze them all in!!

Occasionally panoramic, more often intimate, in Clouds of Love and War author Rachel Billington balances a detailed and highly researched picture of the life of a Second World War Spitfire pilot with the travails and ambitions of a young woman too often on her own. The result is both a gripping story of war and a sensitive story of love, a love that struggles to survive. Eddie and Eva meet on the eve of the Second World War. Eddie only wants to be a flyer, to find escape in the clouds from his own complicated family. However, the Battle of Britain makes a pilot's life a dangerous way to flee reality. Eva has her own passionate longing: to become a painter. When Eva's Jewish mother disappears to Germany, she is left alone with her elderly father. Both Eddie and Eva come of age at a time that teaches them that happiness is always fleeting, but there are things worth living or dying for. Through the connecting stories of these young people and their wider families, and against a background of southern county airfields, London, Oxford, Dorset and France, Rachel Billington brings the world of war time England, now eighty years in the past, back to life.

A striking historical novel about an ordinary young British woman sent to uncover a network of spies and war criminals in post-war Germany that will appeal to fans of The Huntress and Transcription.World War II has just ended, and Britain has established the Control Commission for Germany, which oversees their zone of occupation. The Control Commission hires British civilians to work in Germany, rebuild the shattered nation and prosecute war crimes. Somewhat aimless, bored with her job as a provincial schoolteacher, and unwilling to live with her stuffy genteel parents any longer, twentysomething Edith Graham applies for a job with the Commission—but is instead recruited by the OSS. To them, Edith is perfect spy material…single, ordinary-looking, with a college degree in German. And there’s another thing—the OSS knows that Edith’s brother went to Oxford with one of their most hunted war criminals, Count Kurt von Stabenow, who Edith remembers all too well from before the war.Intrigued by the challenge, Edith heads to Germany armed with a convincing cover story: she’s an unassuming schoolteacher sent to help resurrect German primary schools. To send information back to her OSS handlers in London, Edith has crafted the perfect alter ego, cookbook author Stella Snelling, who writes a popular magazine cookery column that embeds crucial intelligence within the recipes she collects. But occupied Germany is awash with other spies, collaborators, and opportunists, and as she’s pulled into their world, Edith soon discovers that no one is what they seem to be. The closer she gets to uncovering von Stabenow’s whereabouts—and the network of German civilians who still support him—the greater the danger. With a unique, compelling premise, Miss Graham’s Cold War Cookbook is a beautifully crafted and gripping novel about daring, betrayal, and female friendship.

‘There’s nothing logical about Pencradoc!’Aspiring actress Cordelia Beaumont is fed up of spending summer in the city. So, when the opportunity presents itself, she jumps straight on a train to pay a visit to Pencradoc – the beautiful Cornish estate where her friend Merryn works. But far from the relaxing break Cordy imagined, she soon finds herself immersed in the glamorous yet mysterious world of Victorian theatre sensation, Lily Valentine. Lily was once a guest at Pencradoc and, with the help of visiting artist Matt Harker, Cordy comes to discover that the actress left far more than memories at the old house. She also left a scandalous secret ...

If it had happened to you, you would have run away too.
Twenty-five years ago, Paul's friend Charlie Crabtree brutally killed their classmate - and then vanished without a trace.
Paul's never forgiven himself for his part in what happened. He's never gone back home.
Until his elderly mother has a fall. It's finally time to stop running.
It's not long before things start to go wrong. His mother claims there's someone in the house. Paul realises someone is following him. And, in a town many miles away, a copycat killer has struck.
Which makes him wonder - what really happened to Charlie the day of the murder?
And can anyone stop it happening again?
FEATHERTIDE by BETH CARTWRIGHT
publication date - 30th July 2020

A life-changing journey.Born covered in the feathers of a bird, and kept hidden in a crumbling house full of secrets, Marea has always known she was different, but never known why. And so to find answers, she goes in search of the father she has never met.The hunt leads her to the City of Murmurs, a place of mermaids and mystery, where jars of swirling mist are carried through the streets by the broken-hearted.And Marea will never forget what she learns thereFeathertide is an enchanting, magical novel perfect for fans of Erin Morgenstern's The Night Circus and Katherine Arden's The Bear and the Nightingale.

‘A fox could be a shape-shifter, a spirit being. It could appear in human form if this suited its purposes; it could come and go as it pleased, play tricks, lead men astray.’A film director in Hackney with a fox problem in her garden; an escapee from a cult in Japan; a Sydney café-owner rekindling an old flame; an English tutor who gets too close to an oligarch; a journalist on Mars, face-to-face with his fate.The world has taught these men and women to live off their wits. They know how to play smart, but what happens when they need to be wise?In the Time of Foxes is both compellingly readable and deeply insightful about the times in which we live, each narrative a compressed novel. With an exhilarating span of people and places, woven together by the most mercurial of animals, it shows the short story collection at its most entertaining and rewarding, and introduces Jo Lennan as a captivating new storyteller.

Just a few to keep me going! And I'm sure there'll be more to catch my eye along the way! What are you hoping to read this month?!