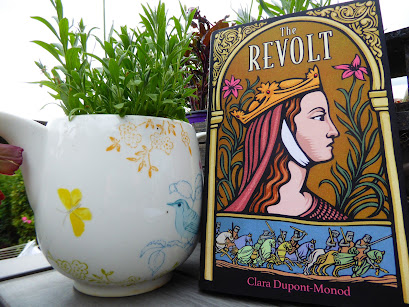 ABOUT THE BOOK
It is with a soft voice, full of menace, that our mother commands us to overthrow our father . . .Richard Lionheart tells the story of his mother, Eleanor of Aquitaine. In 1173, she and three of her sons instigate a rebellion to overthrow the English king, her husband Henry Plantagenet. What prompts this revolt? How does a great queen persuade her children to rise up against their father? And how does a son cope with this crushing conflict of loyalties?Replete with poetry and cruelty, this story takes us to the heart of the relationship between a mother and her favourite son - two individuals sustained by literature, unspoken love, honour and terrible violence
PUBLISHED BY QUERCUS
PURCHASE LINKS
Amazon
hive.co.uk
Blackwell's
MY REVIEW
Royals sure know how to do family feuds well don't they!? And what a story Richard Lionheart has to share in this book as he tells the story of his mother, Eleanor of Aquitane. I'm ashamed to say I knew very little of her story, only the very basics, but this book has made me want to research this remarkable and resilient woman even more as what an amazing character she was.
I wasn't sure how it would work with her son telling her story, but I found it to be an intriguing viewpoint as he watches his family torn apart by power and greed, and having to pick sides when your mother and father are so headstrong wasn't the easiest for them all. What did make it easy was the way their father seemed to despise them all which is why so many took their mothers side and helped her fight the battles ahead.
And Eleanor herself was such a powerful woman, even before she married Henry, as she was Queen of France for 15 years. No wife had ever left a King before so when she left King Louis she made people sit up and take notice - she was pretty ruthless and suffered no fools gladly! 2 months after she left Louis, she married Henry who was set to be King of England!! She was a woman who knew what she wanted, and got it!!
Even at her lowest points she seemed to have the belief that all would work out in her favour in the end and I loved that about her and the journey that she went on. She went through some emotional times as a mother, but refused to wallow and always seemed ready to bounce back.
I really enjoyed how this book made history more accessible. It's not just a list of names and dates but brilliantly tells the pulsating story of a family divided - the ultimate dysfunctional family!! With so many strong characters, it's inevitable there was going to be trouble and I found it to be a really enjoyable read! Highly recommended for all historical fans!!
My thanks to Elise at Quercus for the advanced reader copy in return for a fair and honest review.
★★★★
Posted by Books and Me! at Wednesday, August 05, 2020