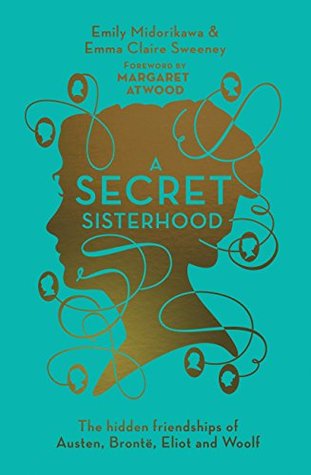 ABOUT THE BOOK
A Secret Sisterhood uncovers the hidden literary friendships of the world’s most respected female authors.Drawing on letters and diaries, some of which have never been published before, this book will reveal Jane Austen’s bond with a family servant, the amateur playwright Anne Sharp; how Charlotte Brontë was inspired by the daring feminist Mary Taylor; the transatlantic relationship between George Eliot and the authorof Uncle Tom’s Cabin, Harriet Beecher Stowe; and the underlying erotic charge that lit the friendship of Virginia Woolf and Katherine Mansfield – a pair too often dismissed as bitter foes.In their first book together, Midorikawa and Sweeney resurrect these literary collaborations, which were sometimes illicit, scandalous and volatile; sometimes supportive, radical or inspiring; but always, until now, tantalisingly consigned to the shadows.
PUBLISHED BY AURUM PRESS
MY REVIEW
This was book 18 of my 20 Books of Summer 2020.An illuminating and absorbing look at some of the literary world and the friendships forged between some of the leading women writers over the years. Written by 2 female authors whose own friendships led to them looking at how other female writers have become close over the years, I found this to be so informative and insightful and made me learn so much more about these well known women.From Jane Austen to Charlotte Bronte, George Eliot to Virginia Woolf this book gives a nod to the world these women found themselves living in, and how they connected with fellow authors at the same time. It also gives the reader an idea of the struggles they faced both personally and also in the world of books as women writers were often dismissed quite quickly.This book brought to my attention just how little I really knew about some of these women - their paths to writing and their family backgrounds with many of their home lives being far from idyll. But their determination and belief in their writing carried them through, along with the friendships they struck up along the way with other women writers facing the same issues.Some of the friendships may have seem unlikely from the outside, but I think their writing bought them together and the shared admiration for the writing they produced was clear to see from correspondence shared between them. There is also a lovely use of photos and personal effects in this book which really added a personal touch to the stories.Highly recommended.
★★★★
Posted by Books and Me! at Monday, August 24, 2020