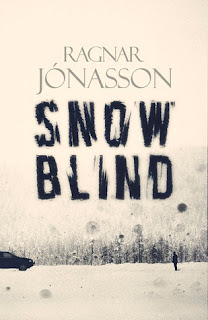 Siglufjörður: an idyllically quiet fishing village in Northern Iceland, where no one locks their doors – accessible only via a small mountain tunnel. Ari Thór Arason: a rookie policeman on his first posting, far from his girlfriend in Reykjavik – with a past that he’s unable to leave behind. When a young woman is found lying half-naked in the snow, bleeding and unconscious, and a highly esteemed, elderly writer falls to his death in the local theatre, Ari is dragged straight into the heart of a community where he can trust no one, and secrets and lies are a way of life. An avalanche and unremitting snowstorms close the mountain pass, and the 24-hour darkness threatens to push Ari over the edge, as curtains begin to twitch, and his investigation becomes increasingly complex, chilling and personal. Past plays tag with the present and the claustrophobic tension mounts, while Ari is thrust ever deeper into his own darkness – blinded by snow, and with a killer on the loose.

Book 11 of my 20 Books of Summer 2020.I find myself reading this series out of order, and it doesn't diminish my enjoyment one bit!! It is one of those series that I find myself drawn to at odd times, and I find the darkness and twists and turns so compelling each time I start a new adventure!The story flits between the past and present so we get little glimpses from the victim and their perspective of 'that night', alongside the aftermath where Ari is set to work on trying to solve a crime with no witnesses in a community that are very close and reluctant to share anything with this newcomer.Ari has moved to the area alone, leaving his girlfriend behind and wondering if he has made the right decision. He seems to live permanently in a state of not believing in himself and never seeing things through. But there's something about this case that irks him and he seems more reluctant to persue the crime than others around him. Maybe as a newcomer he doesn't have that link with the locals so he can see them all a little clearer than those who have lived there a long time, and he starts to notice oddities in this case.It's not only the setting that is chilling, but the way the story is written. Ari is a complex character who doesn't really let you connect with him personally, but the way he works is meticulous and compelling!