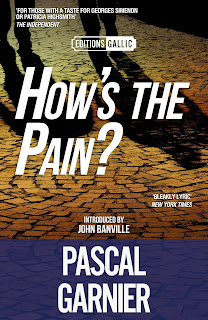 Death is Simon’s business. And now the ageing vermin exterminator is preparing to die. But he still has one last job down on the coast and he needs a driver. Bernard is twenty-one. He can drive and he’s never seen the sea. He can’t pass up the chance to chauffeur for Simon, whatever his mother may say. As the unlikely pair set off on their journey, Bernard soon finds that Simon’s definition of vermin is broader than he’d expected...Veering from the hilarious to the horrific, this offbeat story from master stylist, Pascal Garnier, is at heart an affecting study of human frailties.

A book that has the ending at the beginning! BUT it works!! It doesn't spoil the ride you are taken on with these quirkier characters and I loved it! The dryness of the humour, the darker themes with the setting and the character traits and the fact that it packs an awful, lot in to such a short space!From the very dark opening, it's a book that doesn't let you go! Simon and Bernard are the main two characters and they're not your average, run of the mill kind of blokes! Their pasts explain their present and their outlook on life. Simon finds himself in need of a driver - step forward Bernard who lives at home so he can care for his mother. But he's looking for an escape, an adventure, so this job is the perfect opportunity for him - even if he doesn't really understand what Simon is planning on doing!They are an unlikely pairing but they need one another! I think Bernard sees Simon as a kind of father figure, although Simon isn't really the kind of person to let people in and always tries to keep them at arms length. He doesn't have time to show emotion or share feelings!Along the way they encounter some even more intriguing characters, and they even pick up a mother and baby along the way to add to the melting pot! I did love the touches of humour that lifted the darker side of the book and I found it strangely touching, in a weird way! These misfits sharing time together while dealing with their own turmoil and troubles.

Thank you to Gallic Books for my arc copy of this in return for  a fair and honest review.