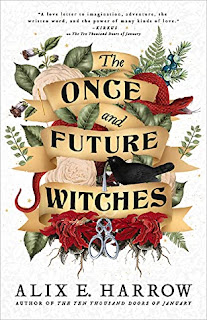 A huge delight to be the lastest stop on the Blog Tour for the magical THE ONCE AND FUTURE WITCHES by ALIX E.HARROW. My thanks to the author, publisher and Tracy of Compulsive Readers for putting the tour together and letting me be part of it all!
ABOUT THE BOOK
In 1893, there's no such thing as witches. There used to be, in the wild, dark days before the burnings began, but now witching is nothing but tidy charms and nursery rhymes. If the modern woman wants any measure of power, she must find it at the ballot box.
But when the Eastwood sisters--James Juniper, Agnes Amaranth, and Beatrice Belladonna--join the suffragists of New Salem, they begin to pursue the forgotten words and ways that might turn the women's movement into the witch's movement. Stalked by shadows and sickness, hunted by forces who will not suffer a witch to vote-and perhaps not even to live-the sisters will need to delve into the oldest magics, draw new alliances, and heal the bond between them if they want to survive.
There's no such thing as witches. But there will be.
PUBLISHED BY ORBIT BOOKS
PURCHASE LINKS
Amazon
hive.co.uk
blackwell's

How's that for an easy review haha!! I absolutely adored every single second I spent in the company of the Eastwood sisters - all very different and not even in each others lives for a number of years UNTIL they are drawn together to fight the unfairness of a world that seems set on destroying women wanting to be heard.  Seen but not heard seems to be the order of the day but for these women that is not how they want things so despite their differences they come together to form a united front in fighting for what is right.

This is a story of strong women, of overcoming adversity and for standing up for what you believe in.  Their lives haven't been easy and there are grievances between them but in fighting this common battle they grow closer together again and it was just such a wonderful story to read.

Many in New Salem want the past of their town forgotten and will do whatever it means to keep the old ways gone, but changing times are upon us so June, Beatrice and Agnes are at the centre of the efforts of the women's movement. It's an angry book, but inspiring and beautifully written from the  slow pace at times, to the revelations of the past and I just completely lost myself in the world created.  In the 3 main characters, Alix has conjured (sorry!) up such fascinating and polar opposite characters - you can see yourself in all of them - but they have that determination to keep fighting for what is right despite the obstacles put in front of them and the danger they put themselves in.

I loved her previous book, The Ten Thousand Doors of January, but think I loved this even more!! Definitely one of my books of 2020!! 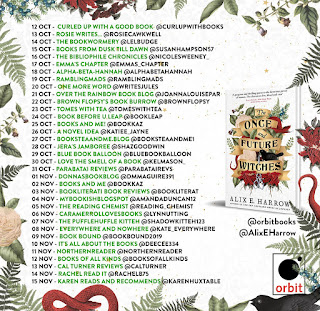