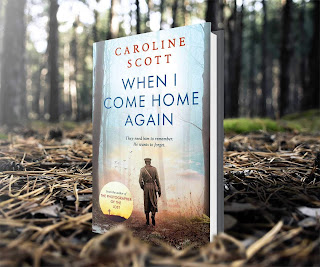 A huge delight today to be part of the start of the Blog Tour for the wonderful WHEN I COME HOME AGAIN by CAROLINE SCOTT. My thanks to the author, publsher and Anne of  Random Things Tours for putting the tour together and letting me be part of it all!
ABOUT THE BOOK
**From the highly acclaimed author of The Photographer of the Lost, a BBC Radio 2 Book Club Pick**
They need him to remember. He wants to forget.
1918.
In the last week of the First World War, a uniformed soldier is arrested in Durham Cathedral. When questioned, it becomes clear he has no memory of who he is or how he came to be there.
The soldier is given the name Adam and transferred to a rehabilitation home where his doctor James is determined to recover who this man once was. But Adam doesn’t want to remember. Unwilling to relive the trauma of war, Adam has locked his memory away, seemingly for good.
When a newspaper publishes a feature about Adam, three women come forward, each claiming that he is someone she lost in the war. But does he believe any of these women? Or is there another family out there waiting for him to come home?
Based on true events, When I Come Home Again is a deeply moving and powerful story of a nation’s outpouring of grief, and the search for hope in the aftermath of war.
Praise for The Photographer of the Lost '[An] impressive debut… a touching novel of love and loss' - Sunday Times
PURCHASE LINKS
AMAZON UK
HIVE.CO.UK
BLACKWELL'S
WHSMITH
ABOUT THE AUTHOR 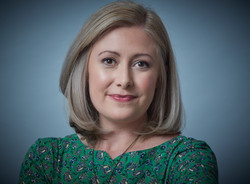 About the Author
Caroline completed a PhD in History at the University of Durham. She developed a particular interest in the impact of the First World War on the landscape of Belgium and France, and in the experience of women during the conflict – fascinations that she was able to pursue while she spent several years working as a researcher for a Belgian company. Caroline is originally from Lancashire, but now lives in southwest France. The Photographer of the Lost was a BBC Radio 2 Book Club pick.
Further praise for The Photographer Of The Lost
‘This excellent debut is a melancholic reminder of the rippling after-effects of war’ - The Times 'There's only one word for this novel… and that's epic… A beautifully written must-read' - heat
'A gripping, devastating novel about the lost and the ones they left behind' - Sarra Manning, RED
MY REVIEW
Wow Wow Wow!! After being blown away by the release last year of The Photographer of the Lost (if you've not read it yet, go buy it now!!), I was equally excited and nervous for the release of When I Come Home Again, not knowing what to expect! But my fears were quashed within the first page as I was instantly grabbed by the opening scene and stayed gripped throughout as the story of 'Adam' unfolds.
You join the story in 1918, with this soldier who has no memory, not even knowing his name.  You can only begin to imagine the horrors that he has faced over the previous years.  Step forward Dr Haworth who is brought in to try and help unlock his memories.  Adam is plagued by nightmares and you can just feel the despair that he feels in not knowing who he is, what he's been through and why he can't remember. Does he want to remember?
The despair is shared by his Dr and his wife who live at the rehab facility.  They can see that Adam is an intelligent man, but there's something that holding him back from unlocking that part of his mind that has shut down.
Putting his photograph in  a newspaper to see if anybody can recognise him opens up yet more heartache - this time for those desperate back home for loved ones who have  gone missing.  I loved the way these different characters were introduced and just brought home to me how the war had affected everybody - they waved off their love ones at the start and never heard from them again.  So to have this mystery man, they could see a sliver of light at the end of the tunnel and convinced themselves that Adam really was their missing loved ones.  They just need to convince Adam of the same....
I found myself so drawn into the mystery of Adam, and the role he played in bringing comfort or closure to the women he met claiming that he was known to them.  The way he got on with his life and sought solace in gardening and drawing.  And it wasn't only Adam who was seeking help in the end, as the Doctor was dealing with his own issues and you get the impression that he found the Adam 'project' an initial distraction from facing up to problems he was having.
A beautifully written and crafted book.  It's a book that made me think more of the impact the war had on everybody, not just those who had been on the frontline, and it is a story that will stay with me for a very long time!!  Stunning!!
★★★★★ 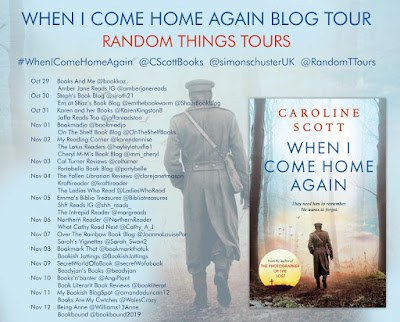