#BookReview ESCAPE TO THE LITTLE CHATEAU by MARIE LAVAL #PublicationDay 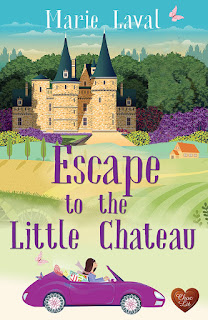 ABOUT THE BOOK
Will Amy’s dreams of a Provençal escape come true?
There are many reasons Amy Carter is determined to make Bellefontaine, her farmhouse hotel in the French countryside, a success. Of course, there’s the time and money she’s put in to making it beautiful, but she also has something to prove – particularly to people like Fabien Coste.
Fabien is the owner of the nearby château, and he might just be the most arrogant, patronising man Amy has ever met ... unfortunately, he’s also the most handsome.
But as rumours circulate in the local community and secrets about the old farmhouse begin to reveal themselves, Amy quickly sees the less idyllic side of life at Bellefontaine. Could Fabien be the man to help prevent her Provençal dream from turning into a nightmare?
This was previously published as A Spell in Provence by Accent Press in 2015. This is a revised, edited and updated version. Published October 2020 by Choc Lit.
PURCHASE LINKS

This is one of those books that makes you want to pack up all your stuff and head for the French countryside in the hope that you'll discover your own Fabien!! Swoon!!

But that's not why Amy finds herself in France - she's determined to make a big success of opening her own farmhouse hotel. No mean feat considering she's new to the country and hoping to do everything herself! Her dreams and determination will have you on her side from the get go, and the gorgeous setting she finds herself in is just an added bonus!

Fabien is the owner of the swanky local chateau, and is a big name across the world for first class establishment so he's well aware of the work needed to run a business so tries to offer some friendly advice to Amy, of which she isn't too keen to take on board! You get the idea she doesn't like being told how to do things, even if that makes her appear a little stubborn and ungrateful!

But this isn't a straightforward romance story, as there is a much darker side to the goings on especially within the area and Amy finds herself in the middle of it.  It is clear someone doesn't take too kindly to her being there and there are a number of threats that are very sinister.

There's a lot for Amy to learn, both about running a business, and also the local folklore and history and with the help of Fabian she uncovers some disturbing details of the lady of the forest! You are just hoping that this dream move for Amy doesn't turn into a nightmare!

I loved the dark and light of this story!  It added so much edge to it and it was often quite shocking to see how dark things got!  A bewitching tale!!