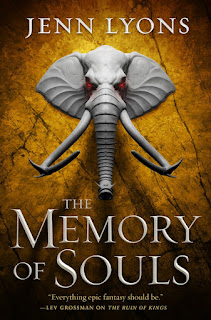 ABOUT THE BOOK
The Memory of Souls is the third epic fantasy in Jenn Lyons’ Chorus of Dragons series.THE LONGER HE LIVESTHE MORE DANGEROUS HE BECOMESNow that Relos Var’s plans have been revealed and demons are free to rampage across the empire, the fulfillment of the ancient prophecies—and the end of the world—is closer than ever.To buy time for humanity, Kihrin needs to convince the king of the Manol vané to perform an ancient ritual which will strip the entire race of their immortality, but it’s a ritual which certain vané will do anything to prevent. Including assassinating the messengers.Worse, Kihrin must come to terms with the horrifying possibility that his connection to the king of demons, Vol Karoth, is growing steadily in strength.How can he hope to save anyone when he might turn out to be the greatest threat of them all?
PUBLISHED BY TOR BOOKS
PURCHASE LINKS
HIVE.CO.UK
BLACKWELL'S
GOLDSBORO - signed edition
MY REVIEW
The series that just keeps on getting better and better, and throwing even more curveballs and shocks our way!! Love it!This is a story that goes back, forth, sideways, up and down and will keep you on your toes as a reader and scramble your brain in the process!!It's another thrilling installment of this epic fantasy read full of epic battles, dragons, deceit, dragons, demons, dragons, gods, dragons, magic.... and did I mention dragons?! It's also very helpful with a glossary to help you pronounce names, family trees and an extremely useful timeline to help you make sense of what you've read! I'm at that age where retaining information is often a struggle but having these handy guides were a godsend!!Kihrin and friends are on another quest for help and, as always, there are many obstacles placed in their way, and we see the story told from different viewpoints as before -and the wonderfully humorous footnotes are back which do add brilliant light relief from the action as it unfolds!It always amazes me when an author creates a storyline like this! With each new book there's added depth to the characters that you think you know! This series keeps on excelling on the complex storyline front but you never feel detached from it despite the intricacies!Nothing is set in stone with this series with the constant shifts and it is confusing AF as times BUT it all works because of the characters! They are different and complex creatures that frustrate and excite with their attitudes and I love them! I just cannot wait to see what the author throws at us next in the series with book 4 on the way!!!
★★★★★

My thanks to Stephen at Tor Books for the copy of the book in return for a fair and honest review!