#BookReview A WEDDING ON THE RIVIERA by EVONNE WAREHAM 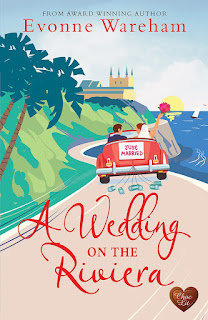 ABOUT THE BOOK
A return to the Riviera on the trail of a runaway groom ...When out-of-work actor Ryan Calder attends a wedding as the plus-one of successful businesswoman, Nadine Wells, he doesn’t expect to get in a scuffle with the groom.But Ryan has a good reason. He recognises the groom from another wedding where the same man made a quick getaway, taking the wedding money and leaving a heartbroken bride in his wake. It seems he's struck again, and Nadine's poor friend is the target.Ryan and Nadine decide they can’t let it happen to another woman, so with a group of friends they hatch a plan that will take them to the French Riviera, hot on the heels of the crooked groom. But could their scheme to bring him to justice also succeed in bringing them closer together?
PUBLISHED BY CHOC LIT
PURCHASE LINKS

A story that is a brilliant escape from the reality of life!! It has excitement and mystery galore in a beautiful setting and I loved reconnecting with characters from the first in the series, although this can easily be read as a standalone.Ryan is used to being the plus one at weddings in the line of work that he does! And the more times he spends with Nadine, the harder he finds it to feel a real connection with her and that is really put to the test when they all pull together to try and thwart a serial runaway groom from scamming his next bridal victim. When Nadine puts herself forward as the 'guineapig' fake bride, can Ryan bear to see her with someone else as she tries to lure 'Hemingway' into another wedding.Nadine seems to quite enjoy the subterfuge in this one, although in dealing with a man who has pulled this stunt a number of times, she always needs to be on her toes so she doesn't mess up the plan and I loved how quickly she had to think on her feet sometimes to try and stay one step ahead of the sneaky scoundrel!!Another brilliant and absorbing story from Evonne full of romance and drama galore!! Highly recommended!