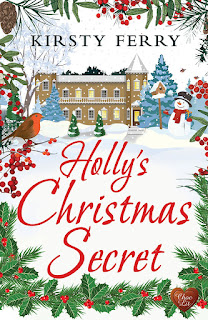 Christmas in October??! Yes please!! We need something to brighten our days, so I'm so happy to share this guest post from the lovely Kirsty Ferry to celebrate it being publication day for HOLLY'S CHRISTMAS SECRET!! So get some suitable Xmas music on your playlist and read on for more about this fabulous new release!! I've added the links too for you to grab your copy!!
Over to you Kirsty....

Holly’s Christmas Secret is the eighteenth book I’ve had published by Choc Lit, and my fifth Christmas book. The way it’s worked out that for each series I’ve done, I’ve produced a Christmas book. Next year could pose a bit of a challenge, as the book I’m currently writing is the summer Pencradoc book, and the final one in the series as it stands. So unless I can whip up a book to be written and published on top of that one, to have a new series started in readiness for a Christmas book, I’ll have to do a standalone – which poses its own problems! But for now, let’s think about this year’s Christmas book.

Holly’s Christmas Secret is the third book in the ‘Cornish Secrets’ series, and we have jumped ahead from Lily Valentine’s infamous visit to Pencradoc in 1895, to Christmas 1906. Lady Elsie Pencradoc, the precocious eight-year-old from Lily’s Secret, is now a young woman: beautiful, Bohemian and just as arty and dramatic as she was when she was eight. She invites her friend, Holly, to a Christmas party at Pencradoc and concocts a fun ruse to introduce her as “Lady” Holly, mainly to annoy one of the most irritating, snobbish guests there, but also because Holly has a deep-rooted love of fairytales and wants to enjoy her own Cinderella story that evening. Holly catches the eye of Noel, a down-to-earth party guest and sparks fly.

The contemporary storyline is focused on Sorcha, who was introduced in Lily’s Secret very briefly as the owner of the Tower Tea Room on the estate, and Locryn, a new addition to Pencradoc village. Locryn owns an antiques shop and has a very special family secret of his own. There’s plenty of festive baking in this book, and my mouth was watering as I wrote about the treats Sorcha was preparing for her Festive Afternoon Teas. It’s all so very clear in my head what the tea room looks like, and how she’s decorated the place like Santa’s Grotto – even to where the seats are placed in the tea room, and how the staircase curves up into the exhibition space which Locryn is using. I wish I could go there, to be honest!

I really hope that you enjoy visiting Pencradoc at Christmas as much as I did – even though I was still finishing the book off in April! And I promise I’ll get thinking about Christmas 2021, just as soon as I get Pencradoc number four off the table!

Once upon a Cornish Christmas ...

It’s almost Christmas at the Pencradoc estate in Cornwall which means that, as usual, tea room owner Sorcha Davies is baking up a festive storm. And this year Sorcha is hoping her mince pies will be going down a treat at ‘The Spirit of Christmas Past’ exhibition being organised at the house by new local antiques dealer, Locryn Dyer.

But as Locryn and Sorcha spend more time together, they begin to uncover a very special story of Christmas past that played out at Pencradoc more than a century before, involving a certain ‘Lady’Holly Sawyer, a festive dinner party and a magical secret encounter with a handsome author ... 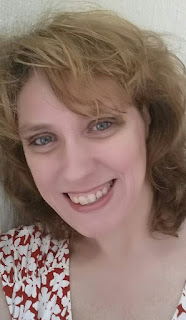 Kirsty Ferry is from the North East of England and lives there with her husband and son. She won the English Heritage/Belsay Hall National Creative Writing competition and has had articles and short stories published in various magazines. Her work also appears in several anthologies, incorporating such diverse themes as vampires, crime, angels and more.