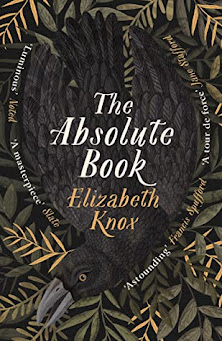 Something to look forward to in 2021!! It can't come quick enough for my liking to be fair, so I'm happy today to be able to share the cover and animation for the forthcoming release THE ABSOLUTE BOOK by ELIZABETH KNOX. My thanks to the team at Michael Joseph for letting me be part of it all!!
That cover!! 😍😍😍
ABOUT THE BOOK
Taryn Cornick believes her sister Bea was deliberately run down and killed. She believes it so hard she allows a man called the Muleskinner to exact the justice Bea was denied. An eye for an eye.Which is when Taryn's problems really begin.Because the police suspect Taryn's involvement in the death.Worse, others have their eyes on Taryn - those in a faraway place who know what Taryn's family have been carefully hiding in their vast library. The Absolute Book.They want it - and they want Taryn to help find it.For the lives of those in more than one world depend upon it...
PRE-ORDER LINK