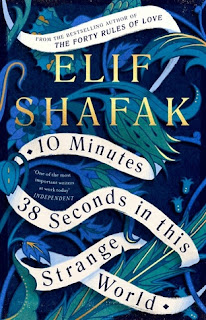 'In the first minute following her death, Tequila Leila's consciousness began to ebb, slowly and steadily, like a tide receding from the shore. Her brain cells, having run out of blood, were now completely deprived of oxygen. But they did not shut down. Not right away...'

For Leila, each minute after her death brings a sensuous memory: the taste of spiced goat stew, sacrificed by her father to celebrate the long-awaited birth of a son; the sight of bubbling vats of lemon and sugar which the women use to wax their legs while the men attend mosque; the scent of cardamom coffee that Leila shares with a handsome student in the brothel where she works. Each memory, too, recalls the friends she made at each key moment in her life - friends who are now desperately trying to find her. . .

I listened to the audioversion of this book.
Wow!! Wasn't expecting that!! I had heard a few things about this story and was wondering just how it works - how can you tell the story of someone who has just died from their perspective? Well, this book manages it in such a unique way that I was enthralling!
Leila is the victim. She's been murdered and finds herself dumped in a bin in Istanbul. But for just over 10 minutes after her death, she is still conscious in her mind and she's looking back over her life at pivotal moments that have stood out for her, along with the moments leading up to her murder.
From being a young girl and growing up in a very religious and dysfunctional family, to dealing with horrific sexual abuse from a relative, to setting out on her own path in the world, this was a haunting, emotional and enthralling story that will stay with me for quite some time. She talks about people she's met along the way that have shaped her life - for good or bad - and for her, life really does flash in front of her eyes.
I found the aftermath of her death to be so touching with her close friends wanting to do right by her, after the impact she'd made on their lives. As outsiders in society they were all drawn together, and hearing that she was being buried at the Cemetery of the Companionless - a real place - they just wanted her to get the burial she deserved.
A very powerful and captivating book
★★★★
Posted by Books and Me! at Tuesday, November 24, 2020