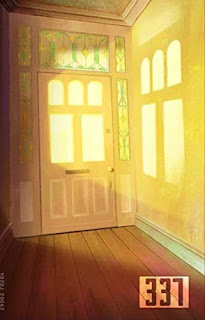 ABOUT THE BOOK
337 follows the life of Samuel Darte whose mother vanished when he was in his teens. It was his brother, Tom who found her wedding ring on the kitchen table along with the note. While their father pays the price of his mother’s disappearance, Sam learns that his long-estranged Gramma is living out her last days in a nursing home nearby. Keen to learn about what really happened that day and realising the importance of how little time there is, he visits her to finally get the truth. Soon it’ll be too late and the family secrets will be lost forever. Reduced to ashes. But in a story like this, nothing is as it seems.
PUBLISHED BY HIDEAWAY FALL
PURCHASE LINK
AMAZON
MY REVIEW
I found this to be one of those 'quiet' books that focus on a family plagued by tragedy, that then sledgehammers you with the truth later on, so all the trauma, the angst and issues that have impacted on Sam and his family are laid bare.The story centres around a family where the mother disappeared while her 2 sons were younger - one day she was there, the next they find a note on the table with her wedding ring and no sign of her. This causes major upheaval for the family with police questioning, rumours and gossip from the neighbourhood - a major impact on the 2 young boys who have to try and make sense of it all.WE catch up with them as men, Sam mainly, who is the only one around to go and visit his grandmother in a home as she's on the verge of death. Can she shed more light on the events all those years ago?I was so gripped by the human aspect to this story - how traumatic events play such a huge role on the outlook on life of those involved. How it had split the brothers up, how Sam found himself constantly living in the past unable to move on and live life normally. So much anger and resentment had built up so he goes to visit his grandmother hoping to find answers.This was definitely a powerful page turner for me, watching as the mystery of the story was revealed with flashbacks to the family in the past - before and after the mother disappeared. This adds to the tension and makes you understand why Sam acts the way he does now. And then there's that ending... I'm still reeling now!!
★★★★★
My thanks to the author and publisher for the advanced reading copy in return for a fair and honest review.
Posted by Books and Me! at Sunday, November 29, 2020