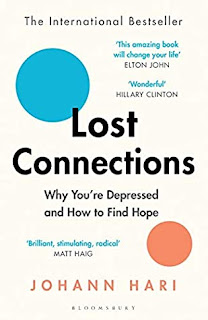 ABOUT THE BOOK
From the New York Times bestselling author of Chasing the Scream: The First and Last Days of the War on Drugs, a startling challenge to our thinking about depression and anxiety.

Award-winning journalist Johann Hari suffered from depression since he was a child and started taking antidepressants when he was a teenager. He was told—like his entire generation—that his problem was caused by a chemical imbalance in his brain. As an adult, trained in the social sciences, he began to investigate this question—and he learned that almost everything we have been told about depression and anxiety is wrong.

Across the world, Hari discovered social scientists who were uncovering the real causes—and they are mostly not in our brains, but in the way we live today. Hari’s journey took him from the people living in the tunnels beneath Las Vegas, to an Amish community in Indiana, to an uprising in Berlin—all showing in vivid and dramatic detail these new insights. They lead to solutions radically different from the ones we have been offered up until now.

Just as Chasing the Scream transformed the global debate about addiction, with over twenty million views for his TED talk and the animation based on it, Lost Connections will lead us to a very different debate about depression and anxiety—one that shows how, together, we can end this epidemic.

This was a really fascinating and eye opening book on the causes/remedies behind depression and anxiety. It is one of those books, I think, that will split readers based on their own personal knowledge and dealings with depression and anxiety as it puts the case across for not 'swallowing' (pardon the pun) the normal prescriptive advice from the medical profession and to treat the problem as a whole - what has caused the low moods?I think the world we live in nowadays, pills seem to be put forward as the answer to everything. In this book, the author looks a bit more objectively to that market and how that some people who are continually prescribed pills to deal with their depression, soon find that the pills begin to wear off so the dosage has to be increased - and repeat the process again. The author wants people to look a little more into the actual cause of the depression in your life and to work on that rather than just hoping a little pill will change your life overnight - for some that works! for others it doesn't so it was nice to read this book to give the different views and options for helping yourself. It puts a lot of modern life into perspective and I enjoyed the way he looks at the world we live in and sees how that affects our perception of life and of happiness. The impact of social media in this disconnected culture we live in was staggering - basically our society sucks!! It's a never ending world of wanting more stuff, feeling unworthy and forever chasing that 'buzz' be it something new, or a like on a social media post and it's only going to get worse as youngsters are growing up in this world seduced by brands and impacted on how people portray themselves on instagram. You can see why many more young people struggle with their mental health nowadays - am so glad I grew up before the internet came along!One phrase I'll take away from this book is ' see the sanity in your sadness, not the madness'This is a book that divides opinions but I'm grateful for reading something that challenges the pill popping world we find ourselves in - it makes you look a little more into drug companies as well and their 'claims'! Scary!!