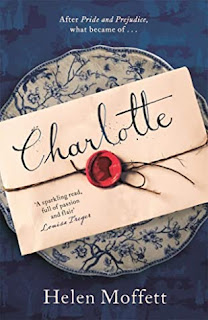 ABOUT THE BOOK
Everybody thinks that Charlotte Lucas has no prospects. She is twenty-seven years old, unmarried, plain, and seemingly without ambition. When she stuns the neighbourhood by accepting the proposal of buffoonish clergyman Mr Collins, her best friend Lizzy Bennet is angry at her for undervaluing herself. Yet the decision is the only way Charlotte knows to provide for her future, and marriage will propel her into a new world, of duty, marriage, children, grief and ultimately illicit love, and a kind of freedom.Jane Austen cared deeply about the constraints of women in Regency England. This powerful reimagining takes up where Austen left off, showing us a woman determined to carve a place for herself in the world. Charlotte offers a fresh, feminist addition to the post-Austen canon, beautifully imagined, and brimming with passion and intelligence

I listened to the audioversion of this bookThis is the 'what might have happened next' once Pride & Prejudice was finished and it surprised me as to how much I wanted to know! And it worked! There's some artistic licence throughout, obviously, but it made for such an engaging and endearing read as we get to see what happened to Charlotte in her married life.Charlotte is one of those characters that you struggle to find things to dislike about - she's a realist, she's pragmatic and resilient. In her marriage to Mr Collins, they have children and are drawn together over the loss of a child - it makes her look at him through different eyes. But she's still fighting the times of nothing being expected of women other than being married and having children, and she struggles with where that leaves her daughters in the future.She goes to stay with Lizzie and Darcy for sometime to help her friend through some sadder times, and her eyes are opened to different experiences and viewpoints of the world.The only thing that felt out of place for me was the rather OTT sex scene, but other than that this book a brilliant little look at the now and then for Charlotte - seeing how she got to where she was, the life she imagined and the life she got and was good to see how the attitudes towards women were starting to change amongst society.