#AudiobookReview THE CONFESSION by JESSIE BURTON 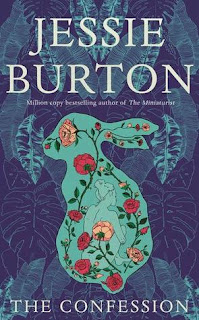 ABOUT THE BOOK
One winter's afternoon on Hampstead Heath in 1980, Elise Morceau meets Constance Holden and quickly falls under her spell. Connie is bold and alluring, a successful writer whose novel is being turned into a major Hollywood film. Elise follows Connie to LA, a city of strange dreams and swimming pools and late-night gatherings of glamorous people. But whilst Connie thrives on the heat and electricity of this new world where everyone is reaching for the stars and no one is telling the truth, Elise finds herself floundering. When she overhears a conversation at a party that turns everything on its head, Elise makes an impulsive decision that will change her life forever.Three decades later, Rose Simmons is seeking answers about her mother, who disappeared when she was a baby. Having learned that the last person to see her was Constance Holden, a reclusive novelist who withdrew from public life at the peak of her fame, Rose is drawn to the door of Connie's imposing house in search of a confession . . .From the million-copy bestselling author of The Miniaturist and The Muse, this is a luminous, powerful and deeply moving novel about secrets and storytelling, motherhood and friendship, and how we lose and find ourselves.
PUBLISHED BY PICADOR
MY REVIEW
I listened to the audiobook version.For me this had a slow start, but soon I got intrigued by the characters and the dilemmas they faced in their lives. The story revolves around 3 women - Rose, Elise and Constance - and set over 2 main time periods. Back in the 1980's we get to see the relationship buiild up between Elise and Constance. Elise was much younger than Constance and seemingly bowled over by this older woman taking an interest in her and how their life together takes them to America because of the book that Constance wrote.while in America they drift apart, as Elise finds that she's not the centre of attention showing her immaturity and naivety.Meanwhile, the 2010 storyline follows Rose as she is facing an uncertain time in her life. She never feels settled and is questioning her relationship, and is looking for answers relating to her mother after a conversation with her father. This really rocks her world and has a massive impact on her state of mind and leads her down a different path as discovers more about her mother.I loved the different timelines in this book which also gave the feeling of history repeating itself with the way characters behaved. At times these women weren't the easiest to like as they often came across in a selfish way in their actions, after initially feeling sympathetic towards them. It has a glossy soap opera feel to it at times especially with looking back at the time spent in America.it's a story of a daughter searching for answers and a young woman finding her way in the world, and it was interesting to see how the experiences of the women involved affected their relationships and perspectives.