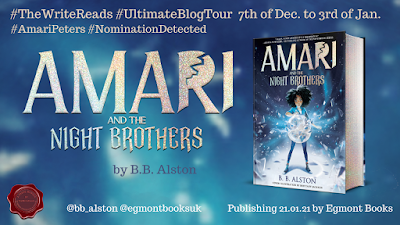 Delighted to be part of the Blog Tour today for the fabulous AMARI AND THE NIGHT BROTHERS by B.B.ALSTON. My thanks to the author, publisher and The Write Reads gang for letting me be part of it all!
ABOUT THE BOOK 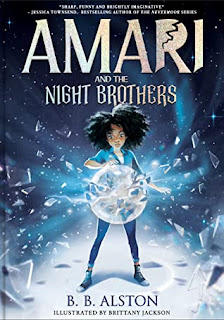 An epic middle grade supernatural adventure series, soon to be a major movie starring Marsai Martin. Perfect for readers aged 8+ and fans of Percy Jackson, Nevermoor and Men in Black!Amari Peters knows three things.Her big brother Quinton has gone missing.No one will talk about it.His mysterious job holds the secret . . .So when Amari gets an invitation to the Bureau of Supernatural Affairs, she’s certain this is her chance to find Quinton. But first she has to get her head around the new world of the Bureau, where mermaids, aliens and magicians are real, and her roommate is a weredragon.Amari must compete against kids who’ve known about the supernatural world their whole lives, and when each trainee is awarded a special supernatural talent, Amari is given an illegal talent – one that the Bureau views as dangerous.With an evil magician threatening the whole supernatural world, and her own classmates thinking she is the enemy, Amari has never felt more alone. But if she doesn’t pass the three tryouts, she may never find out what happened to Quinton . . .

What a fabulous introduction to the world of Amari!! This is one of those books that gives you a little bit of everything at middle grade - the magic, the adventure, suspense and supernatural, alongside the element of family unity and I just loved it! Now I can't wait to see it turned into a film!!

Amari is in trouble at school for standing up to the bullies who have been harrassing her, so she's rather shocked when she receives a mysterious email, inviting her to be part of a secret program - especially when her brother was part of the same program and has been missing in action for months.  Maybe she can finally find out what happened to him.

What follows is real spy/secret agent stuff and it was so much fun! There's the fantastical and the magical, and her new life is anything but easy! But she's driven to reconnecting with her brother and I loved trying to work out, alongside Amari, who she could trust and just where the adventure would take her! It often led to places I never could have imagined! All Amari wants are answers as to what happeend to her brother and the truth might be a little darker than she imagined!!

This is a book that will appeal to girls and boys as it's full of youngsters having adventures and taking on responsibilities at an early age - it's a real blast!