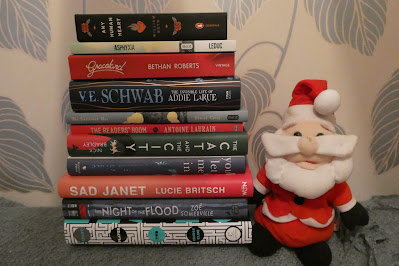 Santa spoilt me this year! I must have been good... stop laughing!!  So I thought I'd share this little Santa bookhaul that I woke up to on Christmas Day!  Should keep me busy for a little while....
READY PLAYER TWO by ERNEST CLINE

An unexpected quest. Two worlds at stake. Are you ready?Days after Oasis founder James Halliday's contest, Wade Watts makes a discovery that changes everything. Hidden within Halliday's vault, waiting for his heir to find, lies a technological advancement that will once again change the world and make the Oasis a thousand times more wondrous, and addictive, than even Wade dreamed possible. With it comes a new riddle and a new quest. A last Easter egg from Halliday, hinting at a mysterious prize. And an unexpected, impossibly powerful, and dangerous new rival awaits, one who will kill millions to get what he wants. Wade's life and the future of the Oasis are again at stake, but this time the fate of humanity also hangs in the balance.
THE NIGHT OF THE FLOOD by ZOE SOMERVILLE

An atmospheric literary thriller set in north Norfolk in the shadow of the Cold War, in which a love triangle turns murderous.Her heart beat hard. There was a crazed beauty to the storm. It was almost miraculous, the way it took away the mess of life, sweeping all in its path...No-one could have foreseen the changes the summer of 1952 would bring. Cramming for her final exams on her family's farm on the Norfolk coast, Verity Frost feels trapped between past and present: the devotion of her childhood friend Arthur, just returned from National Service, and her strange new desire to escape.When Verity meets Jack, a charismatic American pilot, he seems to offer the glamour and adventure she so craves, and Arthur becomes determined to uncover the dirt beneath his rival's glossy sheen.As summer turns to winter, a devastating storm hits the coast, flooding the land and altering everything in its path. In this new, watery landscape, Verity's tangled web of secrets, lies and passion will bring about a crime that will change all their lives forever.
SAD JANET by LUCIE BRITSCH

For as long as I can remember feeling things, I’ve felt sadness. Now, for example, I feel sad that we have no money. Also a little mad that a bunch of idiots seem to have it all. But sad, mostly, because I think that’s just the way things are. It’s an all-encompassing feeling, like my lungs are filled with it instead of air.
You’d think it would feel better to be at one with the world.Janet works at a rundown dog shelter in the woods. She wears black, loves the Smiths, and can’t wait to get rid of her passive-aggressive boyfriend. Her brain is full of anxiety, like “one of those closets you never want to open because everything will fall out and crush you.” She has a meddlesome family, eccentric coworkers, one old friend who’s left her for Ibiza, and one new friend who’s really just a neighbor she sees in the hallway. Most of all, Janet has her sadness—a comfortable cloak she uses to insulate herself from the oppressions of the wider world.That is, until one fateful summer when word spreads about a new pill that offers even cynics like her a short-term taste of happiness . . . just long enough to make it through the holidays without wanting to stab someone with a candy cane. When her family stages an intervention, her boyfriend leaves, and the prospect of making it through Christmas alone seems like too much, Janet decides to give them what they want. What follows is life-changing for all concerned—in ways no one quite expects.Hilarious, bitterly wise, and surprisingly warm, Sad Janet is the depression comedy you never knew you needed.
YOU LET ME IN by CAMILLA BRUCE

I wanted someone to know, you see. To know my truth, now that I am gone. How everything and none of it happened.Everyone knew bestselling novelist Cassandra Tipp had twice got away with murder.Even her family were convinced of her guilt.So when she disappears, leaving only a long letter behind, they can but suspect that her conscience finally killed her.But the letter is not what anyone expected. It tells two chilling, darkly disturbing stories. One is a story of bloody nights and magical gifts, of children lost to the woods, of husbands made from twigs and leaves and feathers and bones . . .The other is the story of a little girl who was cruelly treated and grew up crooked in the shadows . . .But which story is true? And where is Cassie now?
THE CAT AND THE CITY by NICK BRADLEY

In Tokyo - one of the world's largest megacities - a stray cat is wending her way through the back alleys. And, with each detour, she brushes up against the seemingly disparate lives of the city-dwellers, connecting them in unexpected ways.But the city is changing. As it does, it pushes her to the margins where she chances upon a series of apparent strangers - from a homeless man squatting in an abandoned hotel, to a shut-in hermit afraid to leave his house, to a convenience store worker searching for love. The cat orbits Tokyo's denizens, drawing them ever closer.
THE READERS' ROOM by ANTOINE LAURAIN

When the manuscript of a debut crime novel arrives at a Parisian publishing house, everyone in the readers’ room is convinced it’s something special. And the committee for France’s highest literary honour, the Prix Goncourt, agrees.But when the shortlist is announced, there’s a problem for editor Violaine Lepage: she has no idea of the author’s identity. As the police begin to investigate a series of murders strangely reminiscent of those recounted in the book, Violaine is not the only one looking for answers. And, suffering memory blanks following an aeroplane accident, she’s beginning to wonder what role she might play in the story …Antoine Laurain, bestselling author of The Red Notebook, combines intrigue and charm in this dazzling novel of mystery, love and the power of books.
THE SWALLOWED MAN by EDWARD CAREY

I am writing this account, in another man's book, by candlelight, inside the belly of a fish. I have been eaten. I have been eaten, yet I am living still. From the acclaimed author of Little comes this beautiful and haunting imagining of the years Geppetto spends within the belly of a sea beast.Drawing upon the Pinocchio story while creating something entirely his own, Carey tells an unforgettable tale of fatherly love and loss, pride and regret, and of the sustaining power of art and imagination.
THE INVISIBLE LIFE OF ADDIE LARUE by V.E.SCHWAB

France, 1714: in a moment of desperation, a young woman makes a Faustian bargain to live forever-and is cursed to be forgotten by everyone she meets.Thus begins the extraordinary life of Addie LaRue, and a dazzling adventure that will play out across centuries and continents, across history and art, as a young woman learns how far she will go to leave her mark on the world.But everything changes when, after nearly 300 years, Addie stumbles across a young man in a hidden bookstore, and he remembers her name.
GRACELAND by BETHAN ROBERTS

What if your son was the King of Rock ‘n’ Roll?From the moment she first holds him, Gladys Presley loves her son Elvis ferociously. She is the one by his side when his father is in the jailhouse; as they move from place to place skirting poverty; as Elvis’s obsession with music grows and he begins his whirlwind rise to never-before-seen success. But while he brings audiences across the land to their knees and achieves unimagined wealth and fame, there is another story – of drinking and diet pills, loneliness and loss – and at the height of his power Elvis finds that even kings must go on alone.
ASPHYXIA by VIOLETTE LEDUC

In a small French town, a young girl grows up under the hard blue gaze of a mother who will not hold her hand. Her only comfort lies in the warmth of her ill grandmother.

Yet the world around her is humming with curiosity. From the obsessive Madame Barbaroux and her endless spring cleaning, to the homeless Monsieur Dezaille and his beloved collection of saucepans, Leduc exposes the eccentricities of provincial life with unflinching candour and striking beauty.

An extraordinary tale of a stifled childhood and an unrelenting love of life from the protégée of Simone de Beauvoir.

ANY HUMAN HEART by WILLIAM BOYD

Every life is both ordinary and extraordinary, but Logan Mountstuart's - lived from the beginning to the end of the twentieth century - contains more than its fair share of both. As a writer who finds inspiration with Hemingway in Paris and Virginia Woolf in London, as a spy recruited by Ian Fleming and betrayed in the war and as an art-dealer in '60s New York, Logan mixes with the movers and shakers of his times. But as a son, friend, lover and husband, he makes the same mistakes we all do in our search for happiness. Here, then, is the story of a life lived to the full - and a journey deep into a very human heart.
📚📚📚
So, which one should I read first?! Suggestions very welcome!!