Hello! And Happy December!! We made it!! That's worth celebrating!  And pushing on with the Goodreads total which says I'm behind on last years target... how can that be??!! I demand a recount..... 😉

So what to read in the month ahead?! I'm torn!! Do I try and catch up with the squillions of books I failed to read each month this year?! Or do I push ahead with reading new and future releases?! And dare I peek at the Netgalley shelves to see what kind of state that is in?!! Decisions, decisions...

Here's a look at the physical books that I've pulled off the shelves to make a start on, and then we'll see where the rest of the month takes me!! 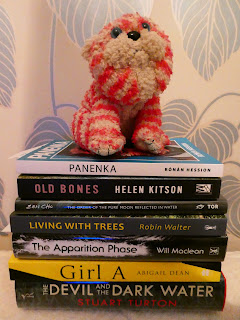 PANENKA by RONAN HESSION - publication date May 2021
His name was Joseph, but for years they had called him Panenka, a name that was his sadness and his story. Panenka has spent 25 years living with the disastrous mistakes of his past, which have made him an exile in his home town and cost him his dearest relationships. Now aged 50, Panenka begins to rebuild an improvised family life with his estranged daughter and her seven year old son. But at night, Panenka suffers crippling headaches that he calls his Iron Mask. Faced with losing everything, he meets Esther, a woman who has come to live in the town to escape her own disappointments. Together, they find resonance in each other's experiences and learn new ways to let love into their broken lives.
OLD BONES by HELEN KITSON - publication date January 2021
Diana and her sister Antonia are house-sharing spinsters who have never got over their respective first loves. Diana owns a gift shop, but rarely works there. Antonia is unemployed, having lost her teaching job at an all girls’ school following a shocking outburst in the classroom after enduring years of torment. Diana is a regular at the local library, Antonia enjoys her “nice” magazines, and they treat themselves to coffee and cake once a week in the village café.Naomi lives alone, haunted by the failure of her two marriages. She works in the library, doesn’t get on with her younger colleagues, and rarely cooks herself a proper meal. Secretly she longs for a Boden frock.When a body is discovered in the local quarry, all three women’s lives are turned upside down. And when Diana’s old flame Gill turns up unexpectedly, tensions finally spill over and threaten to destroy the outwardly peaceful lives all three women have carefully constructed around themselves.Helen takes us back to the fictional Shropshire village of Morevale in this, her brilliant second novel, which exposes the fragilities and strengths of three remarkably unremarkable elderly women.
THE ORDER OF THE PURE MOON REFLECTED IN WATER by ZEN CHO
Zen Cho returns with a found family wuxia fantasy that combines the vibrancy of old school martial arts movies with characters drawn from the margins of history.A bandit walks into a coffeehouse, and it all goes downhill from there. Guet Imm, a young votary of the Order of the Pure Moon, joins up with an eclectic group of thieves (whether they like it or not) in order to protect a sacred object, and finds herself in a far more complicated situation than she could have ever imagined.
LIVING WITH TREES by ROBIN WALTER
Trees and woods offer great potential for rebuilding our wider relationship with nature, reinforcing local identity and sustaining wildlife. We need more trees and woods in our lives, to lock up carbon, to mitigate flooding, to help shade our towns and cities and bring shelter, wildlife and beauty to places. Living with Trees is a cornucopia of practical information, good examples and new ideas that will inspire, guide and encourage people to reconnect with the trees and woods in their community, so we can all discover how to value, celebrate and protect our arboreal neighbours.
THE APPARITION PHASE by WILL MACLEAN
An atmospheric and stunning literary debut, reminiscent of the gothic suspense of Shirley Jackson and the ghost stories of MR JamesTim and Abi have always been different from their peers. Precociously bright, they spend their evenings in their parents’ attic discussing the macabre and unexplained, zealously rereading books on folklore, hauntings and the supernatural. In particular, they are obsessed with photographs of ghostly apparitions and the mix of terror and delight they provoke in their otherwise boring and safe childhoods.But when Tim and Abi decide to fake a photo of a ghost to frighten an unpopular school friend, they set in motion a deadly and terrifying chain of events that neither of them could have predicted, and are forced to confront the possibility that what began as a callous prank might well have taken on a malevolent life of its own.
GIRL A by ABIGAIL DEAN - publication date January 2021
'Girl A,' she said. ‘The girl who escaped. If anyone was going to make it, it was going to be you.’Lex Gracie doesn’t want to think about her family. She doesn’t want to think about growing up in her parents’ House of Horrors. And she doesn’t want to think about her identity as Girl A: the girl who escaped. When her mother dies in prison and leaves Lex and her siblings the family home, she can’t run from her past any longer. Together with her sister, Evie, Lex intends to turn the House of Horrors into a force for good. But first she must come to terms with her six siblings – and with the childhood they shared.
THE DEVIL AND THE DARK WATER by STUART TURTON

A murder on the high seas. A detective duo. A demon who may or may not exist.It's 1634 and Samuel Pipps, the world's greatest detective, is being transported to Amsterdam to be executed for a crime he may, or may not, have committed. Travelling with him is his loyal bodyguard, Arent Hayes, who is determined to prove his friend innocent.But no sooner are they out to sea than devilry begins to blight the voyage. A twice-dead leper stalks the decks. Strange symbols appear on the sails. Livestock is slaughtered.And then three passengers are marked for death, including Samuel.Could a demon be responsible for their misfortunes?With Pipps imprisoned, only Arent can solve a mystery that connects every passenger onboard. A mystery that stretches back into their past and now threatens to sink the ship, killing everybody on board.

What is on your reading plan for the month ahead?!