#Audiobookreview DAISY JONES AND THE SIX by TAYLOR JENKINS REID 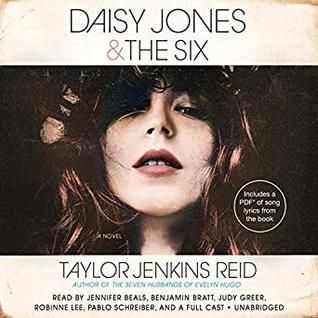 ABOUT THE BOOK
9 hours, 3 minutes

Everyone knows Daisy Jones & The Six, but nobody knows the reason behind their split at the absolute height of their popularity . . . until now.

Daisy is a girl coming of age in L.A. in the late sixties, sneaking into clubs on the Sunset Strip, sleeping with rock stars, and dreaming of singing at the Whisky a Go Go. The sex and drugs are thrilling, but it’s the rock and roll she loves most. By the time she’s twenty, her voice is getting noticed, and she has the kind of heedless beauty that makes people do crazy things.

Also getting noticed is The Six, a band led by the brooding Billy Dunne. On the eve of their first tour, his girlfriend Camila finds out she’s pregnant, and with the pressure of impending fatherhood and fame, Billy goes a little wild on the road.

Daisy and Billy cross paths when a producer realizes that the key to supercharged success is to put the two together. What happens next will become the stuff of legend.

The making of that legend is chronicled in this riveting and unforgettable novel, written as an oral history of one of the biggest bands of the seventies. Taylor Jenkins Reid is a talented writer who takes her work to a new level with Daisy Jones & The Six, brilliantly capturing a place and time in an utterly distinctive voice.

I don't know how the author has done it but she convinced me within a few pages that we were looking back at real people and the experiences during the 1970's and the music business... and I adored every blooming minute of it and just want to read more, and buy merchandise!!! Where are the CD's? The t-shirts?! I want them all!!It's a very simple story - sex and drugs and rock'n'roll! The fame, the glamour and all the good and bad that follows! Daisy Jones is a young girl who has forever chased affection, seeing as she never got any from her self absorbed parents. She drifts from one thing to another and starts to build up a profile - she's stunning too so that always helps her get away with more than she should!And when her path crosses with the band The Six, super-stardom is soon on their doorstep and while it may seem a dream to many of us, it often turns into a bit of a nightmare and we get to look back on the highs and lows of their careers in a cleverly told story that reads like a magazine interview, with various viewpoints chipping in with their recollections of different times during the years and it's a great way to tell the story.Daisy is such a different character to the others in the band, so it's fascinating to see their stories alongside her. While many are happy just to be in the background, the main man of The Six is dealing with his own addictions and issues and he and Daisy make for the main focus of the story and all the headlines the band receive with their clashing personalities and outlooks on how the band should go forward.I really couldn't put this down once I had started it and I'm already eager to pick it up again and enjoy it all over again!! READ THIS BOOK!!

Do I love it even more now I've listened to the audioversion?! HELL YES!!

There concludes my review..... haha!!

This was brilliantly brought to life by all the narrators and just felt like you were listening to a rockumentary on the radio as the evolution of Daisy Jones and The Six is brought to life in all its' glory!  The spirit of each character comes across wonderfully well in audio version and makes them feel even more real! Are you sure they weren't a real band?!

If you haven't read this book yet, then I highly recommend giving the audiobook a listen! The cast capture it perfectly!!