#BookReview ONE BY ONE by HELEN BRIDGETT 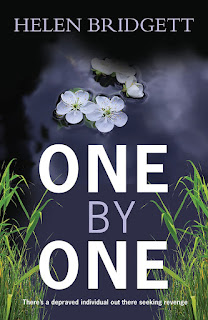 ABOUT THE BOOK
When practising what you preach is easier said than done …Professor Maxie Reddick has her reasons for being sceptical of traditional policing methods, but, in between her criminology lecturing job and her Criminal Thoughts podcast, she stays firmly on the side lines of the crime solving world.Then a young woman is brutally attacked, and suddenly it’s essential that Maxie turns her words into actions; this is no longer an academic exercise – this is somebody’s life.But as she delves deeper, the case takes a sickening turn, which leads Maxie to the horrifying realisation that the attack might not have been a one-off. It seems there’s a depraved individual out there seeking revenge, and they’ll stop at nothing to get it … little by little … one by one.
PUBLISHED BY CHOC LIT
PURCHASE LINKS

This is a book that hits the ground running and then doesn't let up with the tension and twists! And I loved it!  It's one of those books that instantly grabs you and doesn't let go!! And in Professor Maxie, the author has created a character who you want on your side as she's tenacious in her pursuit of the perpetrator, no matter what it costs her personally.
When a young woman is raped, Maxie is brought in by her friend who wants Georgina to report the attack to the police.  She's obviously very traumatised by the attack and struggles to open up.  Maxie has a way with words to try and tease little snippets of information out of her and sets out to retrace her steps on the night of the wedding party when the attack took place.
Her role as a professor of criminology means she pays attention to the smallest of details and that proves her strength in her quest to find out just who would commit such an act.  And when the case takes an even darker turn, she is drawn in even more and might even be putting her own family at risk.
And we also get to see things from the viewpoint of the criminal himself which gave an incredible insight into his frame of mind and his attempts to justify his actions. Putting the blame on the victim and doing all he can to stay out of sight.
There is a great flow to this book. The action never lets up and alongside the investigation into the attack, we also see that things aren't great for Maxie in her own personal  life and haven't been for some time.  You often wonder if she's spending so much time on the case in order to avoid things at home.
This was an intense and thrilling story and I can't wait to read more from the author!
★★★★★
Posted by Books and Me! at Tuesday, January 26, 2021