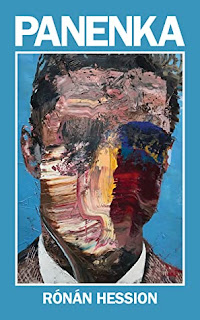 ABOUT THE BOOK
His name was Joseph, but for years they had called him Panenka, a name that was his sadness and his story. Panenka has spent 25 years living with the disastrous mistakes of his past, which have made him an exile in his home town and cost him his dearest relationships. Now aged 50, Panenka begins to rebuild an improvised family life with his estranged daughter and her seven year old son.But at night, Panenka suffers crippling headaches that he calls his Iron Mask. Faced with losing everything, he meets Esther, a woman who has come to live in the town to escape her own disappointments. Together, they find resonance in each other’s experiences and learn new ways to let love into their broken lives.
PUBLISHED BY BLUEMOOSE BOOKS
PUBLICATION DATE - 26TH MAY 2021
PRE-ORDER LINKS
Waterstones

I wanted my first book read in 2021 to be a stunner - I haven't been disappointed!! The champion writer of capturing human emotions and life dilemmas faced is back with this breathtaking piece that brings us the character of Panenka, who in his 50's and is suffering cripping late night headaches, and has done so since his football career finished. With the recent reports of ex footballers dealing with head injuries after their careers, this is a timely release but centres mostly on the effect of those dealing with the consequences and trying to carry on - and often sticking their head in the sand hoping it's just a headache and nothing too serious.Surrounding Panenka is his family - his daughter and his beloved grandson Arthur - and they're very close which is something that hasn't always been that way. But time and his failing health, has given Panenka space to reflect and regret and in this book it shows the side of life when we overthink, we rue decisions made and play out moments in our head thinking how life could have been so different.While he's dealing with struggling to ask for help, we also have flashbacks to his football career for the team Seneca FC. It plays a huge part in the local community and their lives, making stars of their players and how the good times, and bad, on the pitch played out over the years. As a football fan myself, I often forget the 'humans' behind the names, and it was fascinating to read Panenka and his story of key moments in his football career and the impact they had on him as a person. The jubilation after a great game, the despair after a bad one.....But overall, it's a story of human emotions. Those who struggle to reach out and ask for help, of people feeling unloved or unwanted, rarely showing a vunerability and wanting to find a connection with someone that leaves you able to share your fears instead of feeling like a burden and that you'll upset your loved ones by sharing too much. It's about living with regrets and trying to make up for them and all those 'if only' moments.....An absolutely spectacular read and one I feel privileged to have had the opportunity to start the year off with..... is it too early to make my '2021 books of the year' list??!!! Wonderful!!