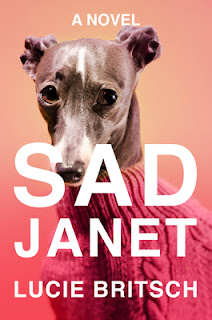 ABOUT THE BOOK
For as long as I can remember feeling things, I’ve felt sadness. Now, for example, I feel sad that we have no money. Also a little mad that a bunch of idiots seem to have it all. But sad, mostly, because I think that’s just the way things are. It’s an all-encompassing feeling, like my lungs are filled with it instead of air.
You’d think it would feel better to be at one with the world.Janet works at a rundown dog shelter in the woods. She wears black, loves the Smiths, and can’t wait to get rid of her passive-aggressive boyfriend. Her brain is full of anxiety, like “one of those closets you never want to open because everything will fall out and crush you.” She has a meddlesome family, eccentric coworkers, one old friend who’s left her for Ibiza, and one new friend who’s really just a neighbor she sees in the hallway. Most of all, Janet has her sadness—a comfortable cloak she uses to insulate herself from the oppressions of the wider world.That is, until one fateful summer when word spreads about a new pill that offers even cynics like her a short-term taste of happiness . . . just long enough to make it through the holidays without wanting to stab someone with a candy cane. When her family stages an intervention, her boyfriend leaves, and the prospect of making it through Christmas alone seems like too much, Janet decides to give them what they want. What follows is life-changing for all concerned—in ways no one quite expects.Hilarious, bitterly wise, and surprisingly warm, Sad Janet is the depression comedy you never knew you needed.
PURCHASE LINKS
hive.co.uk
blackwell's
MY REVIEW
Bloody brilliant!!I wouldn't call Janet sad, I'd call her a realist! A non conformist. A woman being herself!! And that's what made this such a striking read and hit home so much for me!! She doesn't follow fads or trends, and she almost embraces her 'sadness' in the way she sees the world! She knows it's not all puppies and unicorns, she despairs at the injustices and fakeness of the world where others seemingly throw themselves at ways of fitting in, scared of missing out on something.Janet is a woman who is sad at the state of the world - she isn't alone on that front! She works at a local dog shelter where she can avoid people! A smart woman!! But her family and friend despair at her apathetic perception of the world. They want her to smile more and find the happiness they claim to have - courtesy of a variety of pills! - so constantly pester her to seek medical help. But that's just not Janet!! She embraces the rough with the smooth! She almost finds comfort in her sadness! She understands her sadness! The sadness just bothers other people!Her sadness makes others uncomfortable so she starts to ponder the option given to her by the Doctor to take a pill that will let her leave the sadness behind. Is it easy to just take a pill and have a different reaction to life? It seems to work for many others in the world so maybe this new option could be a godsend for her.I loved seeing her wrestle with this big decision. With her seeing through the b***s*** of life and all in it, she is happy being 'quietly sad'. But to please others she starts to consider the options, weighing up the pros and cons of being part of this trial period for this pill. Is it worth it to make others happy? Does that stop her being 'her'?I could happily wax lyrical about this book and the character of Janet! She is so observant and incisive on the ways of the world! It totally captures the insanity of the world we live in - the obsession with popping pills, with being happy 24/7 and living in a medicated world where people just become emotionless robots, all doing the same thing, thinking the same way..... is that the true definition of happy?She seems angry at the way the world and others think she needs fixing. What is wrong with feeling things? Why is she made to feel like she's the odd one out and should she just do what everyone else does just to fit in - something I think we all feel especially nowadays with the impact social media has on us all.This was a book that is dark, cutting, witty, hilarious and beautifully insightful. As Janet begins her journey into a different way of life, we get to meet others who think the way she does and see how fitting in makes her feel. Will it appease her family? And at what cost to her? This is a book that has so many moments that make you think and reassess your viewpoint on doing what is right for yourself!A brilliant read - go buy it!!! NOW!!!!
★★★★★
Posted by Books and Me! at Sunday, January 24, 2021