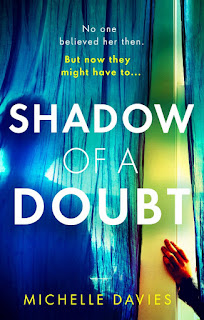 Delighted to be part of the Blog Tour for SHADOW OF A DOUBT by MICHELLE DAVIES today! My thanks to the author, publisher and Alainna at Orion Books for putting the tour together and letting me be part of it all!!  Prepare yourself for a thrilling reading experience!!
ABOUT THE BOOK
Twenty-five years ago my brother was murdered in my family home.I was sent to a psychiatric unit for killing him.The truth is, I didn't do it.The whole world believed nine-year-old Cara killed her younger brother on that fateful night. But she blamed it on a paranormal entity she swears was haunting her house.No one believed her and after two years of treatment in a psychiatric unit for delusional disorder, Cara was shunned by her remaining family and put into foster care.Now she's being forced to return to the family home for the first time since her brother's death, but what if she's about to re-discover the evil that was lurking inside its walls?
published by ORION
PURCHASE LINK
Amazon

Ooh now that's a book that is going to be hard to forget!! Might even have to sleep with the lights on for a while longer after the presence of 'Limey Stan' has entered my subconscious!!! I'm listening out for every little noise now wondering if he's here visiting.....

This book starts with the chilling opening of what happened that night when little Matty, the brother of Cara, got murdered in their home.  Cara was blamed for the crime and sent away to hospital for 2 years to help her recover from her insistence that it wasn't her that killed him, but Limey Stan.  The ghost that has haunted her at night time and who she heard call her name...

When her mother dies, Cara is left the house in the will and that means she has to go back and face those demons that she left behind.  What you as a reader get to experience is her meeting up with old neighbours who still blame her, and those who were on her side, and see how Cara deals with all the nightmares that still plague her mind.  She's tried her best to move on but some things you just can't forget....

There's a really good pace to this story! Along with flashbacks from 'that' night, we get to see how the media reported the story and are still interested in the fallout and when the spooky goings on start to begin again in the house it really raises the chill factor!! There's also the brilliant part of the book that sheds light on to the story from the viewpoint of the mother which added some nice twists and a whole new angle to the storyline.

I enjoyed this thrilling and absorbing story - it felt mysterious and sinister and that mix worked so well for me! 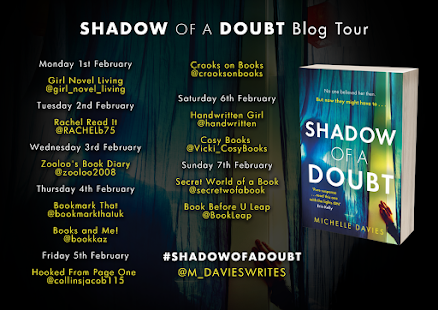