#BookReview NOTHING IMPORTANT HAPPENED TODAY by WILL CARVER #AudioBook 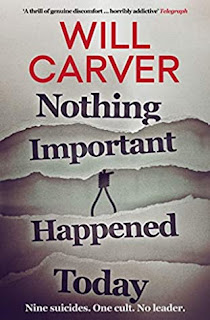 ABOUT THE BOOK
When strangers take part in a series of group suicides, everything suggests that a cult is to blame. How do you stop a cult when nobody knows they are a member?

Nine suicides
One Cult
No leaderNine people arrive one night on Chelsea Bridge. They’ve never met. But at the same time, they run, and leap to their deaths. Each of them received a letter in the post that morning, a pre-written suicide note, and a page containing only four words: Nothing important happened today.That is how they knew they had been chosen to become a part of the People Of Choice: A mysterious suicide cult whose members have no knowledge of one another.Thirty-two people on that train witness the event. Two of them will be next. By the morning, People Of Choice are appearing around the globe; it becomes a movement. A social media page that has lain dormant for four years suddenly has thousands of followers. The police are under pressure to find a link between the cult members, to locate a leader that does not seem to exist.How do you stop a cult when nobody knows they are a member?A shocking, mesmerisingly original and pitch-black thriller, Nothing Important Happened Today confirms Will Carver as one of the most extraordinary, exciting authors in crime fiction.

I listened to the audio version of this book.

Holy crap!! This was bloody brilliant! Yes it's very dark, deals with an extremely sensitive topic (suicides), and is properly twisted BUT once you are under the spell of the writing you'll find yourself absolutely chilled and spellbound and just amazed at how well the story is constructed and executed!!It's a book like no other I've read, especially in the way it unfolds. It starts with the mass suicide of 9 people at a bridge in London, witnessed by unfortunate commuters on a train passing by. What follows is a chain of events that leads to more suicides in seemingly random fashion, bringing together total strangers and leads those investigating the deaths scratching their heads trying to make any sense of it all.The author does a brilliant job of giving you little flashes into the lives of those brought together through 'The Chosen Ones' - they receive a letter in the post, carry on with their day as normal and then all come together at various times and locations to end it all. But what drives them to take the word of a letter as gospel? And who is pulling the strings behind it all to make it happen?It explores how cults survive in the world and how they choose their members wisely. We see personal stories of people struggling inwardly, believing that they're 'nobody' and not making an impact on the world around them - easier enough to do nowadays in this social media obsessed world where we all filter out the negative and only portray the positive. Where the badly behaved are indulged, the lack of parenting skills are exploited, someone else is always to blame, the reality of life is airbrushed to within an inch of its' life - the world we live in is laid bare in this book and it was stunning to see it so brazenly ripped apart!As Detective Pace becomes more and more involved with trying to understand these deaths, we are able to see his life behind the image he portrays, and the darkness that follows him around explored.I was totally transfixed by this story. It also looks at famous real life killer and how they got away with their crimes for so long, or what drove them to it and this added an even darker undertone to the story. What is it that turns people so evil or so negative?This was a chilling, perceptive and exceptional story!