#BookReview I AM DUST by LOUISE BEECH #Audiobook 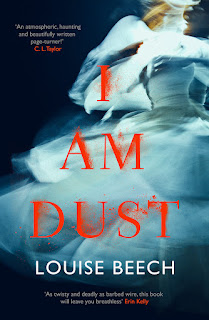 ABOUT THE BOOK
The Dean Wilson Theatre is believed to be haunted by a long-dead actress, singing her last song, waiting for her final cue, looking for her killer…Now Dust, the iconic musical, is returning after twenty years. But who will be brave enough to take on the role of ghostly goddess Esme Black, last played by Morgan Miller, who was murdered in her dressing room?Theatre usher Chloe Dee is caught up in the spectacle. As the new actors arrive, including an unexpected face from her past, everything changes. Are the eerie sounds and sightings backstage real or just her imagination? Is someone playing games?Is the role of Esme Black cursed? Could witchcraft be at the heart of the tragedy? And are dark deeds from Chloe’s past about to catch up with her?Not all the drama takes place onstage. Sometimes murder, magic, obsession and the biggest of betrayals are real life. When you’re in the theatre shadows, you see everything.And Chloe has been watching…
PUBLISHED BY ORENDA
MY REVIEW
I listened to the audio version of this book... wow!IntoxicatingAtmosphericMovingDramaticUnforgettableSpine TinglingTriumphant!!I think that pretty much sums up my thoughts on this book! I always love the stories that Louise creates, and this one just gets under your skin from the get go. With 2 timelines, the past and present, we are based at a theatre and following the story of Chloe who is working there as an usher. She's always wanted to be an actress but this is the closest she has got to her dream! The show Dust is set to return to the theatre, 20 years after the opening, which went down in infamy due to the murder of the main character. She's thought to haunt the theatre still....In Chloe's past, she and 2 friends mucked around with a ouija board and had some chilling encounters that have played a big part in how their lives panned out. As the past starts to reconnect with the present, Chloe is facing some haunting challenges ahead that makes her think she might be losing her mind.The 2 timelines worked so well with each other!! Having the backdrop of the Theatre alongside the tragedy of Dust from 20 years ago, it really sets the scene for so many questions and wondering just what happened back then and seeing how messing about with the ouija board had such an impact and why Chloe is key to it all.I couldn't stop listening to this once I'd started! I found myself picturing the theatre, imagining the terror and confusion of the characters as things played out, and hearing the voices of the past whispering their truths........ loved it!!!
★★★★★
Posted by Books and Me! at Monday, March 29, 2021