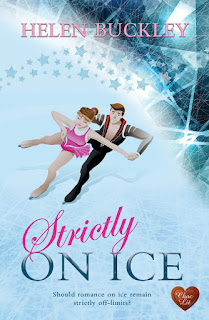 ABOUT THE BOOK
When falling in love comes with the risk of falling flat on your face ...
Former Olympic skating champion Katie Saunders is well known for her ‘ice queen’ persona in the press. On the face of it, perhaps Katie should have forgiven her former skating partner and ex-boyfriend, Alex Michaelson, for the accident that shattered both her ankle and their Olympic dreams – but she just can’t seem to let it go.
When Katie reluctantly agrees to take part in a new TV skating show, it’s only because she’s desperate for cash. What she didn’t count on is the drama – not only is she partnered up with infamous love rat rugby player Jamie Welsh, but one of the judges is none other than Alex Michaelson himself.
As the show progresses, will Katie be shown the hard way, once again, that romance on the ice should remain strictly off-limits?
PURCHASE LINKS

Loved, loved, loved this! When can this be a real show?!  Playing on the reality success of Dancing On Ice, but with a twist, this was a wonderful story that puts 2 former sports stars together for a TV show and waiting to see what happens! Will there be arguments? Romance? And will it help them heal their pasts?

Katie is a former Olympic ice skater, whose career was tragically ended by an awful accident.  She has spent the years since being unable to move on or forget her dreams, and that has led her to this stage in her life where she has to accept an offer from a TV show for the money.  She has already refused previous offers, so it's a big coup for the TV show when she accepts this one.

And then there is Jamie, a former Rugby international, who has also suffered in the years after his career finished.  They have both experienced major disappointments in the world of sport, so maybe that shared bond will allow them to relate to one another - and not to believe the press perceptions that have been allowed to grow over the years.

What I loved about this story was as well as the experience they both get from this reality show, we also see flashbacks into their previous lives - the training, the dedication, the sacrifices, the mistakes - and that really builds up the connection you have with them as characters.  You can understand their reluctance to open up to one another in the beginning, but the more time they spend together,the more they begin to understand each other and realise there is more to them than they've been led to believe from press attention.

This was one of those books that I raced through and was reluctant to put down at all! It has the excitement of a real reality show as you see how they progress from week to week, alongside the human side of their story and some very shocking revelations that just goes to show you shouldn't believe everything you read about people!