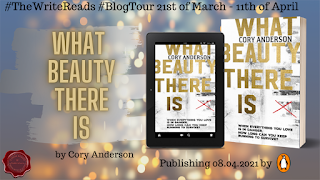 Delighted to be with you today as part of the blog tour for WHAT BEAUTY THERE IS by CORY ANDERSON.  My thanks to the publisher, author and TheWriteReads team for putting the tour together and letting me be part of it all!
ABOUT THE BOOK

When everything you love is in danger, how long can you keep running to survive? Life can be brutal Winter in Idaho. The sky is dark. It is cold enough to crack bones. Jack knew it Jack Dahl has nothing left. Except his younger brother, Matty, who he'd die for. Their mother is gone, and their funds are quickly dwindling, Jack needs to make a choice: lose his brother to foster care, or find the drug money that sent his father to prison.

So did I Ava lives in isolation, a life of silence. For seventeen years her father, a merciless man, has controlled her fate. He has taught her to love no one. Did I feel the flutter of wings when Jack and I met? Did I sense the coming tornado? But now Ava wants to break the rules - to let Jack in and open her heart. Then she discovers that Jack and her father are stalking the same money, and suddenly Ava is faced with a terrible choice: remain silent or speak out and help the brothers survive. Looking back, I think I did . . .

Perfect for fans of Patrick Ness, Meg Rosoff and Daniel Woodrell, What Beauty There Is an unforgettable debut novel that is as compulsive as it is beautiful, and unflinchingly explores the power of determination, survival and love.

'Beautifully written and superbly constructed, Anderson pulls you onto a chilling footpath of love and loss and keeps you there until you've read every last word' Ruta Sepetys, bestselling author of Between Shades of Grey

If your heart doesn't break for Jack in this story, then there's something wrong with you!! This is an extraordinary story about a young boy soldiering the weight of his family problems on his shoulders.  His father is in prison, he found his mother after she committed suicide and now he's having to protect his younger brother from people wanting to settle scores.

His father was jailed for his part in a robbery, and the money is still missing, so his partner wants to find out where it is - and he won't stop until he gets what he wants. His daughter, Ava, meets Jack at school when he helps her out, so she is then torn between family loyalties and her concern for Jack and his brother.

The story has such a dark and unsettling vibe throughout, as Jack seems to face one hurdle after another.  But he's driven and determined and willing to do whatever it takes to keep his little brother safe, and find a way to put their pasts behind them.  You sense his trepidation when reaching out to ask for help from people as he just doesn't have much trust in others - and no wonder with what he's had to face before.

This is a story that packs a punch and is beautifully written.  Prepare for an intense read that keeps you spellbound as you turn every page.