#BookReview A HISTORY OF WHAT COMES NEXT by SYLVAIN NEUVEL @MichaelJBooks 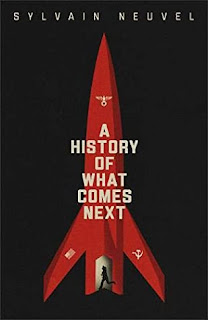 ABOUT THE BOOK
Imagine everything you thought you knew about human progress was wrong. What would you do?Mia is not sure what she is, but she isn't human. Smarter, stronger than her peers, all she knows are the rules: there can never be three for too long; always run, never fight.When she finds herself in Germany, 1945, she must turn the Nazi's most trusted scientist with an offer: abandon the crumbling Nazi party, escape Germany with your life, come to work for the Americans building rockets.But someone is watching her work. An enemy who's smarter, stronger, decidedly not human and prepared to do anything to retrieve something ancient that was long lost.If only she had any idea what it was . . .

This was an exciting and imaginative piece of speculative fiction, that features some really strong female characters, who are front and centre of the plot to try and save the world - despite the humans doing their best to destroy it all with the advancement of rocket technology.The women, mothers and daughters, are seen at various times throughout history, but the main characters, Mia and her mother Sara, are based around Germany in 1945 as the world is busy destroying itself with another war, and the race is on to expand the rocket technology to cause even more destruction. The women work on the premise 'Take Them to the Stars', and you watch as they try and engineer their way into a male dominated world to try and steer humans to a different path. Added to the mix is 'The Tracker' whose task over the years is to stop these women, by any means necessary, and it really is often a race against time to save themselves or those around them when the tracker closes in on their new location.What I loved about this book is the pure strength of the characters - with history repeating itself over and over - we see these women faced with constant hurdles, and their own emotions of anger at the world they witness. We get to see the impact of wars on the countries after the events, how it affected the population and how the bond between mother and daughter never waivers. There's more show of humanity in their behaviour than amongst the humans they encounter at times!This was a book with a great mix of sci-fi and history, and I found it to be really compelling and had a great 'spark' about it. There's also some fascinating author notes at the end, along with a playlist that really added something extra to the whole reading experience.

My thanks to Lucy at Penguin Randomhouse for sending me an advanced copy to read in return for a fair and honest review.