#BookReview THE LAMPLIGHTERS by EMMA STONEX 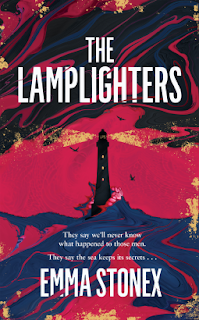 ABOUT THE BOOK
They say we'll never know what happened to those men.

They say the sea keeps its secrets...Cornwall, 1972. Three keepers vanish from a remote lighthouse, miles from the shore. The entrance door is locked from the inside. The clocks have stopped. The Principal Keeper’s weather log describes a mighty storm, but the skies have been clear all week.What happened to those three men, out on the tower? The heavy sea whispers their names. The tide shifts beneath the swell, drowning ghosts. Can their secrets ever be recovered from the waves?Twenty years later, the women they left behind are still struggling to move on. Helen, Jenny and Michelle should have been united by the tragedy, but instead it drove them apart. And then a writer approaches them. He wants to give them a chance to tell their side of the story. But only in confronting their darkest fears can the truth begin to surface . . .The Lamplighters is a heart-stopping mystery rich with the salty air of the Cornish coast, and an unforgettable story of love and grief that explores the way our fears blur the line between the real and the imagined.
PUBLISHED BY PICADOR
PURCHASE LINKS
Amazon

Holy Moly!! This is one of those books that leaves you feeling bereft when it ends! The characters take over your every thought and you're left experiencing every kind of emotion as you read their stories unfold in front of your eyes. And all set against the backdrop of an imposing lighthouse and the unpredictability of the sea.The story is told as now and then! Looking back at the families of the men who worked on the lighthouse and how they dealt with the mystery of the men's disappearance on one fateful night. There's no sign of a struggle, they left no trace behind ... so where did they go and what happened to them? The book is based on a real life event, but the author has a wonderful time reimagining the events surrounding the disappearance and the impact on the families left behind.With the story being told from both the viewpoint of the men as they worked on the lighthouse, and to the women dealing with life married to them and the years that followed after their disappearance, you really get a wonderful sense of how the isolation the men often felt, alongside how the women coped and tried to come to terms with their lives after - their own theories of what happened and the letters shared between the women as their friendships shattered.There's so much going on within each chapter and revelation. I loved the way the story came back to life as the mystery was looked into by a writer who wanted to try and get to the bottom of it all. Old wounds are reopened and feelings have to be confronted.A wonderfully evocative book that has a little bit of every genre in it and I adored every single second of it!!