#BookReview WHISPER DOWN THE LANE by CLAY McLEOD CHAPMAN @quirkbooks 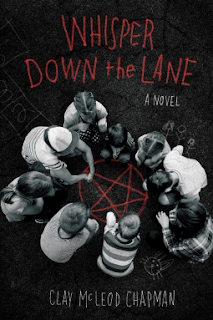 ABOUT THE BOOK
Inspired by the McMartin preschool trials and the Satanic Panic of the ‘80s, the critically acclaimed author of The Remaking delivers another pulse pounding, true-crime-based horror novel.

Richard doesn’t have a past. For him, there is only the present: a new marriage to Tamara, a first chance at fatherhood to her son Elijah, and a quiet but pleasant life as an art teacher at Elijah’s elementary school in Danvers, Virginia. Then the body of a rabbit, ritualistically murdered, appears on the school grounds with a birthday card for Richard tucked beneath it. Richard doesn’t have a birthday—but Sean does . . .

Sean is a five-year-old boy who has just moved to Greenfield, Virginia, with his mother. Like most mothers of the 1980s, she’s worried about bills, childcare, putting food on the table . . . and an encroaching threat to American life that can take the face of anyone: a politician, a friendly neighbor, or even a teacher. When Sean’s school sends a letter to the parents revealing that Sean’s favorite teacher is under investigation, a white lie from Sean lights a fire that engulfs the entire nation—and Sean and his mother are left holding the match.

Now, thirty years later, someone is here to remind Richard that they remember what Sean did. And though Sean doesn’t exist anymore, someone needs to pay the price for his lies.
PUBLISHED BY QUIRK BOOKS
PURCHASE LINK
Amazon
MY REVIEW
This is a book that is loosely based on a true crime event and that's what makes it even more chilling as you read! It's scary enough to think of the situations as pure fiction, but knowing that the real world can be this horrific just adds to the atmosphere created throughout this story, and it kept me thrilled and chilled on every page!Richard is an art teacher with no past. He's a married man with a young child and an art teacher - what could be more normal?! But when the school rabbit is found ritualistically killed on the school field, Richard has a sick sense that this was meant for him to see.Back in the 1980's we're introduced to 5 year old Sean. Life is a struggle for him and his mother, and at school he is the target for bullies. When his mum finds bruises on him, he seems unable to say what happened and she assumes that the teacher was to blame.... Sean could stop the stories before they get out of hand, but he finds he's being listened to for a change, and the centre of attention... what harm can it do to just go along with the others?This was a terrifying look at the danger of how things can spiral out of control so quickly, made even more pertinent in the times we live in when people can be 'cancelled' and have their lives destroyed on the say so of someone else, whether they are telling the truth or not. The power that people feel over others, with no conscience or thoughts of the consequences involved.I loved how the story goes back and forwards in time - the way history is repeating itself and those catch your breath moments when the truth starts to unravel. It was often unsettling to read and a real eye opener as to how quickly lives can be destroyed.It's terrifying, thrilling and a terrific read!!
★★★★★
Posted by Books and Me! at Thursday, April 22, 2021