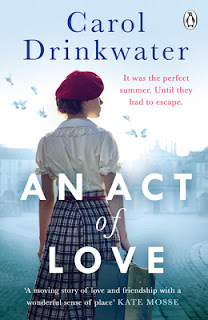 Delighted to be with you today as part of the tour for the wonderful AN ACT OF LOVE by CAROL DRINKWATER.
My thanks to the author and publisher for letting me be part of the tour!
ABOUT THE BOOK
France, 1943.Forced to flee war ravaged Poland, Sara and her parents are offered refuge in a beautiful but dilapidated house in the French Alps. It seems the perfect hideaway, despite haunting traces of the previous occupants who left in haste.But shadows soon fall over Sara's blissful summer, and her blossoming romance with local villager Alain. As the Nazis close in, the family is forced to make a harrowing choice that could drive them apart forever, while Sara's own bid for freedom risks several lives . . .Will her family make it through the summer together?And can she hold onto the love she has found with Alain?
PUBLISHED BY PENGUIN
PURCHASE LINK
Amazon
MY REVIEW
This is a really evocative and powerful historical romance, that gives you a glimpse at life amidst the fear of war.  Set in France, a young family are seeking shelter after having to flee Poland and they soon find themselves part of a new community and wondering where life will take them next.
The story is told as Sara looks back over her life, surrounded by her family, and is dealing with regrets from the past.  As she shares what happened to her during 1943 we get to see what life was like for the Polish Jews  forced to flee and hide, all to avoid death.
She was 17 at the time, so life in the new French village where the locals welcomed them, was something very different.  There's even some optimism about their future - that soon turned to dread as events from the War took a darker turn and got closer to where they were.   She gets herself a job looking after children for a local family, but you can sense they never feel settled because of that unknown element of will they continue to be safe.
I really felt the trepidation and fear of Sara as she found herself living a new life with a new identity, and helping with the war effort in whatever way she could.  The hope that her time spent with Alain gave her really does steady her mind and gives her some kind of security, but you know she's always wary of feeling too settled anywhere.
The characters and settings are really brought to life throughout, and that dread of never knowing what was around the corner comes through loud and clear.  The realities of life, often hopeful, often cruel, are really explored throughout this beautifully written book.
★★★★ 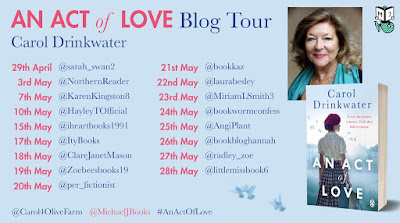