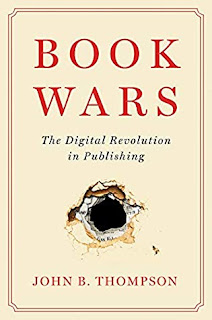 ABOUT THE BOOK
This book tells the story of the turbulent decades when the book publishing industry collided with the great technological revolution of our time. From the surge of ebooks to the self-publishing explosion and the growing popularity of audiobooks, Book Wars provides a comprehensive and fine-grained account of technological disruption in one of our most important and successful creative industries.Like other sectors, publishing has been thrown into disarray by the digital revolution. The foundation on which this industry had been based for 500 years - the packaging and sale of words and images in the form of printed books - was called into question by a technological revolution that enabled symbolic content to be stored, manipulated and transmitted quickly and cheaply. Publishers and retailers found themselves facing a proliferation of new players who were offering new products and services and challenging some of their most deeply held principles and beliefs. The old industry was suddenly thrust into the limelight as bitter conflicts erupted between publishers and new entrants, including powerful new tech giants who saw the world in very different ways. The book wars had begun.While ebooks were at the heart of many of these conflicts, Thompson argues that the most fundamental consequences lie elsewhere. The print-on-paper book has proven to be a remarkably resilient cultural form, but the digital revolution has transformed the industry in other ways, spawning new players which now wield unprecedented power and giving rise to an array of new publishing forms. Most important of all, it has transformed the broader information and communication environment, creating new challenges and new opportunities for publishers as they seek to redefine their role in the digital age.This unrivalled account of the book publishing industry as it faces its greatest challenge since Gutenberg will be essential reading for anyone interested in books and their future.
PUBLISHED BY POLITY PRESS
PURCHASE LINKS
Blackwell's £21.35
Amazon £24.47
Waterstones £30
MY REVIEW
This was a fascinating look at the world of books and how the evolution of digital technology has changed the publishing world and its' outlook over the years!
The author has left no stone unturned as he explores the rise of the e-book and how that has impacted the book world, and while digital technology had been feared by the publishers to begin with, it seems to have opened up new ideas to the 'print' world and seems to have rebooted the 'book' brand and publishing world - which is all good for us readers!
This book looks into how e-books evolved so quickly and how people like Amazon took advantage and how it changed the way people read and bought books. It was feared that with the rise of e-books the print world would suffer in the way that the music industry was, after downloads appeared on the scene, but over time it was realised that some books just worked better in print and this explores that subject in great detail and I really found it so interesting. As an old dinosaur myself, I always prefer the print edition, so it was fascinating to see the charts and graphs that displayed the figures involved in all forms of print, and what genres were enjoyed so much more in digital form.
This book explores a variety of subjects within publishing - the legal issues, marketing, the rise of self publishing, the use of crowdfunding such as Unbound (of which I am happy to have been part of!), the backlist, the use of audiobooks/audible and the role that social media plays now in all forms of publishing be it digital or print.
It brings to the fore how the numbers stack up of each book form and how the outcome of new avenues often have unpredictable results. It was a lengthy read - almost 500 pages - but there is so much to look into and the author has done a brilliant job of using the in-depth analysis to peek behind the curtain, so to speak, into a world of books that has had to change over recent times and showing there is room for both forms thanks to the digital form making the old guard of print rethink and become more creative!
A perfect read for all fans of the humble book - in whatever format you prefer!
★★★★★
Posted by Books and Me! at Tuesday, May 04, 2021