#BookReview THE HOUSE OF ALWAYS by JENN LYONS @BlackCrow_PR @UKTor 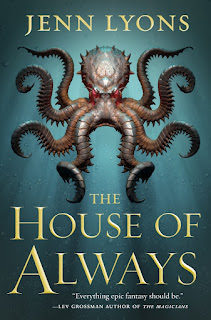 ABOUT THE BOOK
For fans of Brandon Sanderson and Patrick Rothfuss, The House of Always is the fourth epic fantasy in Jenn Lyons' Chorus of Dragons series that began with The Ruin of Kings.

What if you were imprisoned for all eternity?

In the aftermath of the Ritual of Night, everything has changed.

The Eight Immortals have catastrophically failed to stop Kihrin's enemies, who are moving forward with their plans to free Vol Karoth, the King of Demons. Kihrin has his own ideas about how to fight back, but even if he's willing to sacrifice everything for victory, the cost may prove too high for his allies.

Now they face a choice: can they save the world while saving Kihrin, too? Or will they be forced to watch as he becomes the very evil they have all sworn to destroy.
PUBLISHED BY TOR BOOKS
PURCHASE LINK
Amazon
PRAISE FOR A CHORUS OF DRAGONS SERIES
‘What an extraordinary book. The Ruin of Kings is everything epic fantasy should be: rich, cruel, gorgeous, brilliant, enthralling and deeply deeply satisfying. I loved it’ - Lev Grossman
‘Hands-down the best fantasy debut I’ve read in a long time’- Storgy Magazine
‘Everything you could want from a fantasy epic…unputdownable’ - Den of Geek
‘In a sprawling, magic-filled world populated by gods, dragons, krakens, witches, demons, ghosts, shapeshifters, zombies, and so much more, Lyons ties it all together seamlessly to create literary magic. Epic fantasy fans looking for a virtually un-put-down-able read should look no further’ - Kirkus starred review
‘Its lore and memorable characters will leave epic fantasy fans eager for the second volume’ - Publishers Weekly starred review
‘An instant classic and TOR have got an absolute winner on their hands’ - Fantasy Book Review
‘Both innovative and a traditional, grand epic. If you like dragons, twisty storytelling, and you also want to fall in love with a character that eats people, The Ruin of Kings is for you’ -Tasha Suri, Empire of Sand
‘The world-building is vivid, and Lyon’s vision feels fresh and fun. You sense a real intellect at work behind the words, with a detailed cosmology and distinct, witty characters - 4.5 stars’ - SFX Magazine ‘This follow up to Lyon’s brilliant debut takes a similar, assured (and sassy) narrative approach as The Ruin of Kings...Lyons proves she is worthy of comparison to the masters of epic fantasy, such as Patrick Rothfuss, Stephen R . Donaldson (particularly in GrandGuignol action), and Melanie Rawn’ - Booklist starred review
‘Simply put: This is top notch adventure fantasy written for a 21st-century audience - high recommended’ - Kirkus starred review ‘Lyons is creating a complex and wonderful series that will immerse and delight’ - Library Journal
‘Lyons proves she is worthy of comparison to the masters of epic fantasy’ - Booklist starred review

Book 4 in the series and it's still as fresh as Book 1!!  I can't believe the series is almost at the end - one more book to go :( - but this is another gripping, emotional and pulsating instalment to the series that I will be very sad to say goodbye to!

The House of Always is a more mature, character driven story than the past books, and that was quite nice!  It had a different style and change of pace to some of the action in the previous books and it felt good to spend more time connecting with each character as they faced new dangers and dilemmas.  You could see how the different relationships between them were changing so you feel like you get more feel for each character, which isn't always easy when there's too much action going on.

That's not to say there's no action going on in this story! There is plenty! There's battles with demons and dragons, betrayals galore, sacrifices and magic for you to enjoy.  Added to the normal mix of maps, floorplans and the wondrous footnotes that I just can't get enough of! The footnotes are a book in themselves and just add that little something extra to each part of the story!!

The main crux of the story for the characters to work out is why they're all trapped at the Lighthouse of Shadrag Gor, and how they can rescue Kihrin from inside the mind of a god! Sounds like an easy task right?! No chance!!

It's also told from the point of view of Senera which adds a new dynamic to things and I loved finding out more about her past!  None of them ever seem to have nothing to hide!

There are arguments and betrayals, but also an overwhelming feel of unity - 'the world changed' is a phrase that is used a lot and you really do get that sense of each action they take having a greater impact on the outcome of each battle.

I found this to be real edge of the seat stuff throughout and it has just fitted so nicely into the series, with things building perfectly for the next installment.... I hope we're not waiting too long! I don't think I can cope without knowing what is in store next!!

My thanks to the team at Black Crow PR for the advanced reader copy in return for a fair and honest review!