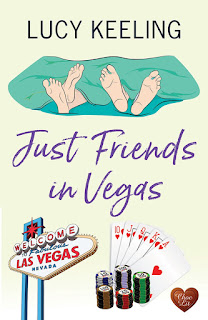 ABOUT THE BOOK
Is love always a losing game?
When Mya is with Smithy, it feels like her eyes are constantly rolling. His wheeling and dealing charisma charms everyone but her. Well, that’s not strictly true – Mya is only human after all, and there’s no doubt the man is hot with his suits and swagger. It’s just that Smithy knows Mya’s secret, and she’s not sure she can trust him to keep it from their group of friends.
As they immerse themselves in the glamorous and mysterious world of ‘The Suits’, growing closer as a result, Smithy has to question whether his time with Mya is destined to become a case of ‘what happens in Vegas stays in Vegas’ ...

This was a fabulous read! It was fun, sexy and full of sparks that it just made me want to pack up and head to Vegas.... I might meet a Smithy while I'm there! He's one of those guys that is a bit of a lad, and full of himself, but that seems more of a front than anything. Underneath you know there's a big softy just waiting to get out!And in this book he has his eyes on Mya! She's a lady full of secrets, and he's party to the biggest secret, but how long will he stay quiet!? And why hasn't she told her friends the real reason why she's over in Vegas to begin with?!This is a fabulous setting for a story!! It's full of glamour and there's lots of mystery and intrigue going on and the group that are thrown together are bound to clash with the varying personalities amongst them!While Mya and Smithy are in Vegas they are both there for the same reason, and - trying not to give away any spoilers! - it was really fun to see how their relationship progressed. Mya is a bit of a hard one to read at times and glimpsing behind the bravado shows us her other side and shows the best way to deal with the sexists amongst the group! Never stoop to their level and hit them where it hurts!!Another great book from Lucy, featuring a feisty female character and a storyline that zips along and keeps you fully involved! Loved it!!