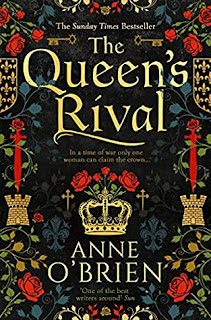 ABOUT THE BOOK
‘One of the best writers around’ Sun

One family united by blood. Torn apart by war…

England, 1459: Cecily, Duchess of York, is embroiled in a plot to topple the weak-minded King Henry VI from the throne. But when the Yorkists are defeated at the Battle of Ludford Bridge, Cecily’s family flee and abandon her to face a marauding Lancastrian army on her own.

Cecily can only watch as her lands are torn apart and divided up by the ruthless Queen Marguerite. From the towers of her prison in Tonbridge Castle, the Duchess begins to spin a web of deceit – one that will eventually lead to treason, to the fall of King Henry VI, and to her eldest son being crowned King of England.

This is a story of heartbreak, ambition and treachery, of one woman’s quest to claim the throne during the violence and tragedy of the Wars of the Roses.

Considering the role she played in a major part of British history, I knew very little of Cecily, the Duchess of York, so I found this book to be an utterly fascinating look at the role that she played in such a turbulent time for her family, and the monarchy as a whole.And I also really enjoyed the way the story is told and that's through the form of letters - from and to Cecily from a number of key figures at the time. There was obviously no quick way of relaying information to family and friends at the time, so the art of letter writing was of key importance in sharing information, and betraying confidences! And I loved how personal it made the whole story feel - that you were peeking over their shoulders to read these letters and finding out what had been going on and what was planned for the future as the battle for the kingdom raged around them. Family vs Family! And in the letters they were able to speak a little more honestly maybe than if they were face to face!This is a story of a woman who is driven to do the best for her family, even when her love and loyalty is pushed to the limits. No matter what is put in her way, she still tries the best to engineer the situation that works out best for what she believes in - no mean feat for a woman especially at that time.This is a beast of a book at over 500 pages long, but it clips along at a fair old pace so you're never left feeling that things drag - you're just eager to get to the next round of letters to see how strategies are playing out and what spanner would be thrown in the works next!A brilliant and cleverly portrayed take on the War of the Roses period and one that has made me even eager to find out even more about that time in history!